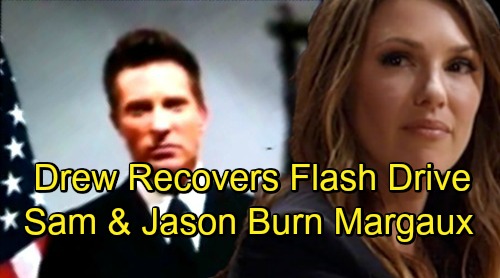 General Hospital spoilers tease that Margaux (Elizabeth Hendrickson) will get a temporary break from Drew’s (Billy Miller) attention and inquisitive conversations for a while. Drew’s attention will be consumed with his son Oscar (Garren Stitt), who he has just learned has terminal cancer. That will give Margaux a reprieve from Drew’s suspicions and snoopy behavior.

Of course, at this point, Margaux knows that Drew suspects her of something. The incident when Drew found a flash drive among Margaux’s things (which innocently turned out to be Margaux’s family pictures) pretty much solidified that.

Chances are, their little song and dance is going to continue for a while. But at some point, GH spoilers say that Drew will realize that Margaux has the flash drive with his memories on it. How he will come to realize this remains to be seen, but he’ll figure it out. And then the objective will become how to get the flash drive away from Margaux.

Drew might just need some help with that quest. Curtis (Donnell Turner) could help, which could get Sam (Kelly Monaco) involved. And where Sam’s involved, Jason’s usually not far behind. Besides, Jason may want to become involved since it has something to do with protecting Sonny.

GH spoilers say that circumstances will shake up the lives of Jason, Drew, and Sam, and the flash drive recovery could be a piece of that. And if they do manage to get the drive back from Margaux, they may be shaken by what they find. Viewers know that the drive contains more than just memories; it contains details of the memory experiments conducted on Drew and Jason.

Do you think that Jason and Sam will help Drew gain possession of the flash drive? Stay tuned to the ABC soap and don’t forget to check CDL often for the latest General Hospital spoilers, updates, and news.