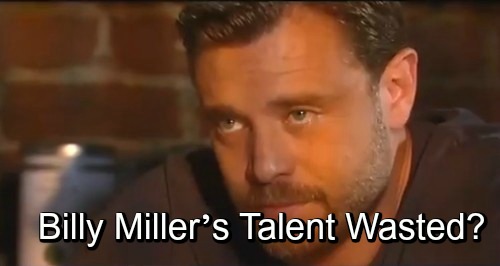 General Hospital (GH) spoilers tease that Drew (Billy Miller) will continue to deal with Oscar (Garren Stitt) drama. He’s doing his best to get through to his son – or at least enjoy what little time he has left with him. Drew will find himself at odds with Kim (Tamara Braun) in the coming weeks. Between the brain tumor and Oscar’s emancipation lawsuit, it’ll take a toll on all parties involved.

However, this story is mostly centered around Oscar. He’s the one who’s sick and lashing out, so Drew’s just a little side player on Oscar’s journey. In fact, Drew’s been taking a backseat for quite some time. Ever since Steve Burton returned to reclaim the role of Jason, Drew’s largely been ignored.

Of course, we don’t blame GH for welcoming Burton back and making the switch. Although Miller made the role his own, Burton’s Jason was classic and what many fans were hoping for. Miller worked well as a recast, but it would’ve been tough to have Burton around again and not let him be Jason Morgan. When GH viewers see Burton’s face, they think Jason. That’s just how it is.

Thankfully, Miller also works as Drew. They’re just not giving him anything to do! Drew doesn’t even have anything going on in the romance department. He split from Sam (Kelly Monaco) and she seems to be leaning toward a reunion with Jason. Drew and Kim have been bonding a bit, but conflict’s coming. Besides, those two have never had a ton of chemistry anyway.

When Elizabeth Hendrickson was hired as Margaux, General Hospital fans envisioned a great story for Drew. After all, Hendrickson and Miller played a hot couple on The Young and the Restless. Chloe and Billy were a popular pairing on Y&R, so it looked like GH was going to try their own version.

Unfortunately, that idea hasn’t gone anywhere thus far. Margaux doesn’t have much personality, so it’s hard to root for her with Drew or anybody else just yet. She sort of flirted with Drew for a while, but that was all about taking down Sonny (Maurice Benard). Margaux claimed to be genuinely interested, but her actions told a different story. You don’t blackmail someone you want to date!

As for Drew’s career, nothing’s happening there. Drew just exists these days and that’s not enough for many GH viewers. General Hospital spoilers don’t have much on the horizon for Drew either, so it’s just a dismal situation all around.

Does Miller deserve a better storyline or at least a viable love interest? Is this three-time Daytime Emmy winner’s talent being wasted? We’ll give you updates as other GH news comes in. Stay tuned to the ABC soap and don’t forget to check CDL often for the latest General Hospital spoilers, updates and news.