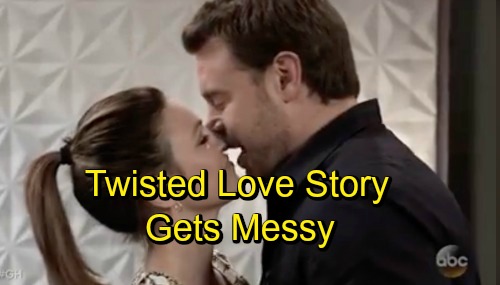 General Hospital (GH) spoilers tease that Drew (Billy Miller) will have to make some difficult choices. He was understandably livid when Margaux (Elizabeth Hendrickson) brought up her trade idea. She wants Drew’s help to bring Sonny (Maurice Benard) down and in exchange, he can have his memories back. Margaux will gladly hand over the flash drive if it means avenging her father’s death.

Drew shut Margaux down, but she pushed him to give the deal some thought. General Hospital spoilers say Drew will indeed mull it over in the week ahead, October 15-19. The fact that he’s even considering the trade is significant. If GH was going to drop this, they’d have Drew reject the offer and move on. Since Drew will wrestle with what to do instead, he’s probably going to take Margaux up on it.

However, Drew will probably resort to some trickery. He may not want to turn on Sonny, so he could come up with a scheme to turn the tables. It would serve Margaux right after all the stunts she’s pulled lately.

Margaux’s coming across as a bit of a psycho at the moment. Her father died before she ever had a chance to know him. Vincent Marino was deep in mob trouble, but Margaux acts like he was some beloved saint who played a significant role in her life. Her vendetta against Sonny might be a little extreme.

As for Drew, Margaux’s words may ring in his ears. She suggested that he shouldn’t settle for being a pale imitation of Jason (Steve Burton). Drew would love to find his own path, but he needs to know where he came from to make it happen. He has to remember his past to fully explore his future.

Drew may be willing to dupe Margaux or even fulfill her wishes to achieve that. A guy’s gotta do what guy’s gotta do! Regardless, GH fans can still see a spark between them. There’s a thin line between love at hate on General Hospital.

Kim (Tamara Braun) seems to be growing closer to Julian (William deVry) now and Sam (Kelly Monaco) just made progress with Jason. Where does that leave Drew? He needs a love interest, so he might as well hit the sheets with Margaux. Maybe they could have some angry sex or fall in bed together as part of Drew’s potential plot. That could leave Drew with some complex feelings.