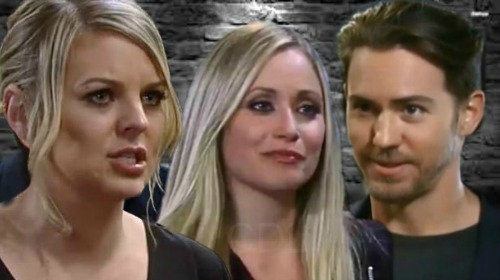 General Hospital (GH) spoilers tease that Maxie (Kirsten Storms) will battle some serious concerns. She just eavesdropped on Lulu (Emme Rylan) and Peter’s (Wes Ramsey) conversation, so she knows they’re headed to the film festival together. Maxie was upset when she heard Peter say it was a date. Some terrible thoughts are swirling through her head right now, but she doesn’t have the whole story.

After fighting on the phone with Dante (Dominic Zamprogna), Lulu broke down in front of Peter. She hated to be unprofessional, but her world’s pretty much fallen apart. The bed’s awfully cold and lonely without Dante in it at night. Lulu’s just going through all the typical mom motions, so she’s at the end of her rope. Her marriage is strained and she’s in desperate need of a good time.

Fortunately, Peter intends to give Lulu that with a night out. It took some convincing, but Lulu ultimately got on board. She could really use some adult conversation and pleasant company. Besides, who doesn’t like watching a few flicks? Too bad Maxie most likely misunderstood their arrangement. Peter and Lulu plan to simply hang out as pals, but Maxie may assume this is a date-date.

General Hospital spoilers say Maxie will be keeping an eye on these two. Now every friendly gesture and kind word will be misinterpreted. Maxie recently defended Peter to Felicia (Kristina Wagner), but she should start to view him in a negative light again. She’ll be irked by Peter and Lulu’s growing bond for a couple crucial reasons.

For starters, there’s Dante. It’s not like he’s off on an extended vacation or something. Dante’s out there pursuing justice on a dangerous mission. He’s neglecting his family, but at least he’s got a decent reason to be away. Maxie considers Dante a good friend, so she won’t like the idea of Lulu betraying him.

Since Maxie lost Nathan (Ryan Paevey), she may resent Lulu for not being loyal to her husband. Maxie might feel like Lulu’s being ungrateful and unfair. Of course, the bigger issue should be Maxie’s jealousy. She may not want to admit it, but she clearly has feelings for Peter. They’re complicated ones, but any GH watcher can see that Maxie’s got them.

As Maxie snoops and witnesses what she views as questionable encounters, her envy will hit hard. General Hospital spoilers say the green-eyed monster may be unleashed! Will Maxie ultimately confront Peter and Lulu? Will it somehow lead to the revelation that Maxie’s falling for Peter?

It’s easy to imagine Maxie kissing Peter in some intense moment. Maybe in his scramble to explain, he’ll blurt out that he has feelings for Maxie, not Lulu. That might be enough to earn Peter a lip lock. Peter and Maxie aren’t ready for couple status just yet, but this ordeal could serve as a nice start.