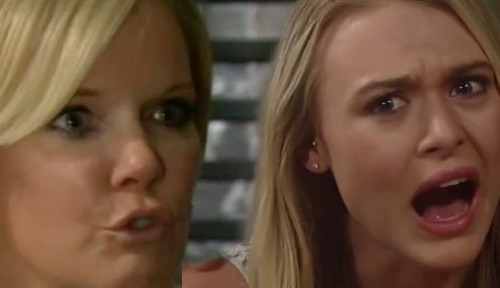 General Hospital (GH) spoilers reveal that Ava’s (Maura West) sinking deeper and deeper. She’s falling down a disturbing hole and she may not be able to climb out of it. Ryan (Jon Lindstrom) was pleased when he ran into a distraught Ava on Thursday. He used the opportunity to score another session with her and bring up some dangerous issues.

During their chat, “Kevin” pushed Ava to admit her darkest desires. He wondered what one thing would satisfy her need for revenge. Ava paused for a moment before laughing it off as reverse psychology. She was sure Dr. Collins would never suggest murdering Kiki (Hayley Erin)!

Ava’s right that the real Dr. Collins wouldn’t, but Ryan’s a different story. Obviously, he can’t come right out and tell Ava to kill Kiki. Ryan has to be careful if he wants to keep his charade intact. GH spoilers say a combination of luck and careful planning will work out well for him.

On October 23, Ava will get hurt. There’s a chance that could be physical, but it sounds like it involves emotional pain. The word injured would be more appropriate if Ava experienced bodily harm. Instead, Ava will probably have to watch Kiki and Griffin (Matt Cohen) grow closer. Ryan may even set up some incident to fuel her need for vengeance.

Ryan would be wise to play both sides here. He might convince Kiki to come in for a few sessions and work through her feelings, too. Naturally, Ryan would assure Kiki that she’s right and Ava’s wrong. He could strengthen the feud between them to prepare for what’s ahead.

Then, Ryan might deviously suggest working things out. He could nudge Ava toward reconciliation knowing Kiki would be riled enough to shut her down. That could lead to those General Hospital spoilers about Ava’s pain.

Once Ava’s got the perfect mixture of intense sorrow and rage, Ryan may hope he can push her over the edge. Of course, it’s doubtful Ava would ever go that far. Deep down, Ava still cares about Kiki. She’s jealous and vindictive, but that doesn’t mean she’d ever want to kill her own daughter.

Ryan will inevitably realize that sooner or later, so he may resolve to do the deed himself. Since Ava’s so fired up about destroying Kiki, she could find herself at the top of the suspect list. If Ryan feels like the cops are getting close to his trail, he may throw more suspicion on Ava. That’s especially true if she ends up rejecting his advances.

Will Ava be framed for Kiki’s murder? That would certainly add to her grief during an already difficult time. Julian (William deVry) might believe Ava’s story, but would anyone else? Franco (Roger Howarth) could potentially come to Ava’s rescue and sort through the Ryan nightmare. He’s got some suspicions about “Kevin,” so those should rev up once deadly mayhem breaks out.

General Hospital has some great shockers cooking up. We’ll give you updates as other GH news comes in. Stay tuned to the ABC soap and don’t forget to check CDL often for the latest General Hospital spoilers, updates and news.