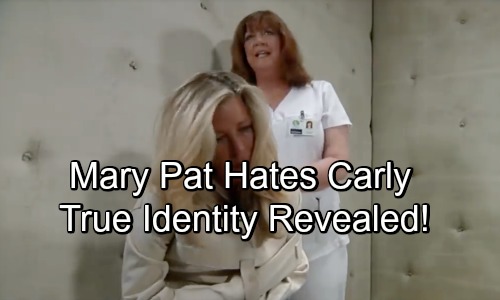 General Hospital spoilers tease that there may be a very good reason for Nurse Mary Pat Ingles’ (Patricia Bethune) obvious hatred of Carly Corinthos (Laura Wright) and her insistence on calling her “Caroline” instead of “Carly”. Longtime General Hospital viewers will remember that when Carly first came to town, she had used her teenage best friend’s name “Carly Roberts”.

That Carly’s real name was Charlotte Roberts, while Carly Corinthos’ real name at the time was Caroline Benson. For both girls, Carly was a nickname.

Carly Corinthos thought that her best friend had been killed in a car accident when they were teenagers until FBI agent Reese Marshall (Kari Wührer) showed up to find a missing Kristina Corinthos (then played by Kali Rodriguez). It turned out Reese was really Carly Roberts!

Kristina had been kidnapped by one of Sonny Corinthos’ (Maurice Benard) enemies, Faith Rosco (Cynthia Preston) who later kidnapped Michael (then played by Dylan Cash) and Morgan (then played by George Juarez) as well. Reese doesn’t know when she came to town that she is really Carly Roberts: she starts having flashbacks of her teenage friend Caroline, and is distracted enough to have a minor car accident.

Eventually an ex-husband comes to Port Charles and divulges Reese’s true identity. Charlotte/Reese/Carly didn’t remember Caroline/Carly until she started having the flashbacks, and Caroline/Carly didn’t recognize her because of her many plastic surgeries after the first car wreck as a teenager, when she was presumed dead.

Later she was killed again in yet another accident, this time a train wreck, when the actress was fired.

If Mary Pat is Charlotte/Carly’s mother that would definitely cause a deep-seated hatred of the woman who stole her daughter’s identity, Carly Corinthos!