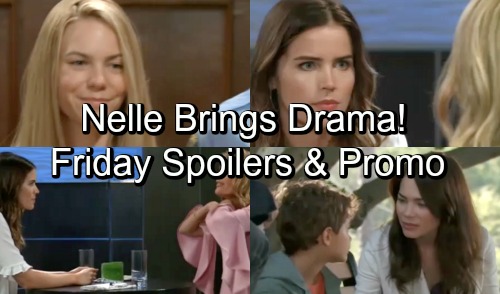 General Hospital (GH) spoilers for Friday, October 12, tease that Liz (Rebecca Herbst) will find out a secret about Aiden (Jason David). This undoubtedly has something to do with Aiden’s recent school issues. He’s developed a bit of a nervous stomach, so there must be some reason why. It seems likely that Aiden’s being bullied like Cameron (William Lipton) predicted.

Liz will sit down for a chat with Aiden and gently ask why he kept this from her. She’ll just want to help, but that may not be an easy task. Kids can be cruel, so Liz will need all hands on deck. General Hospital spoilers say Franco (Roger Howarth) will pitch in on this problem next week.

Meanwhile, it looks like Chase (Josh Swickard) may give his new partner a hard time. He was the new kid on the block not too long ago, but now Valerie’s (Brytni Sarpy) the recently promoted rookie. GH spoilers say this partnership will come with some complications, but maybe Valerie and Chase can work through them soon enough.

Over with Curtis (Donnell Turner), he’ll tell Valentin (James Patrick Stuart) about Nina’s (Michelle Stafford) meeting with Sasha (Sofia Mattsson). Things were off to a nice start when Curtis left, so he’ll provide some positive updates. However, Curtis will point out that the ball’s in Sasha’s court now. She’s the only one who can decide if she wants a real relationship with Nina.

Across town, Nina and Sasha’s chat will continue. General Hospital spoilers say Nina won’t be able to resist asking about the necklace. She’ll show off that heart pendant and wonder if Sasha’s got the other half. Sasha probably doesn’t and the question alone may freak her out. She’s still trying to process all this, so the whole pendant thing may push her over the edge.

Despite Sasha’s attempt to be courteous in the beginning, she’ll ultimately reject her birth mom. Sasha will refuse to bond with Nina any further, so that’ll break her heart. Nina will deal with some remorse on Friday. She may be sorry that she put too much pressure on Sasha and drove her away.

Other General Hospital spoilers say Kristina (Lexi Ainsworth) will feel cornered. Sam (Kelly Monaco) and Alexis (Nancy Lee Grahn) may grill her about her personal life as they eat lunch together. Fortunately, Kristina will know just how to shift gears. She’ll insist that she’d much rather talk about Sam and Jason (Steve Burton)!

Finally, we’ll see some Nelle (Chloe Lanier) drama. Carly (Laura Wright) will think Nelle’s reign of terror is over, but the schemer will continue to pester Michael (Chad Duell). It looks like Carly and Michael will be on hand for Nelle’s court date. Michael will speak to his crazy ex as she sports handcuffs and an orange jumpsuit. Nelle will flash a devious smile and perhaps offer some cryptic clues.

Will Nelle point Michael to the truth about Jonah? She certainly won’t come right out and say it, but Nelle might gloat with a hint or two. We’ll keep you posted as other GH news comes in. Stay tuned to the ABC soap and don’t forget to check CDL often for the latest General Hospital spoilers, updates and news.