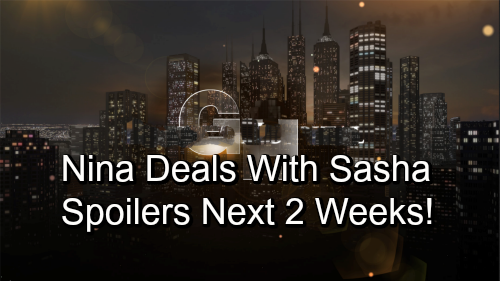 General Hospital (GH) spoilers for the next two weeks tease that several Port Charles residents will face surprises. The week of October 1-5 will bring a big one for Nina (Michelle Stafford). After Valentin (James Patrick Stuart) confirms Sasha (Sofia Mattsson) is Nina’s kid, he’ll deliver updates. As Nina tries to process everything, Maxie (Kirsten Storms) will notice she’s a little out of it.

Nina will be happy about this startling development, but it’ll be a lot to take in. She may confide in Maxie and try to figure out where to from here. Elsewhere, Oscar (Garren Stitt) will shut Drew (Billy Miller) out. It’ll break Drew’s heart to see Oscar struggling, but the teen just won’t want his father’s help. Oscar feels like his dad should’ve come clean about the tumor as soon as he found out.

Meanwhile, deceiving Josslyn (Eden McCoy) will take a toll on Cameron (William Lipton). He’ll get fed up with lying, so he may tell Oscar to confess or else. Over with Monica (Leslie Charleson), she’ll support someone in need. Drew seems like a great option here, but Kim (Tamara Braun) may get some encouragement as well. She’ll need it since she’ll be gearing up for another showdown with Oscar.

Other General Hospital spoilers say Kristina (Lexi Ainsworth) will offer some assistance. She may reach out to Daisy (Kelsey Wang), the new girl she met at Charlie’s Pub. Perhaps there’ll be more concert fliers to hand out or another event to promote. Maybe Kristina and Daisy will hit things off, but what about Valerie (Brytni Sarpy)? GH clearly wanted us to see a spark during their last chat.

There’ll be time for change in Kristina’s love life later. Right now, she should just let loose and have some fun! Across town, Valerie’s career should be looking up. It appears she’ll be promoted to detective, so Chase (Josh Swickard) may have a new partner soon enough.

Speaking of Chase, he’ll also hang out with Lulu (Emme Rylan) this week. Their bond will grow stronger, so we should probably keep an eye on them as a potential couple. During the week of October 8-12, Ava (Maura West) will meet up with Scott (Kin Shriner). She should appreciate his friendship since her relationship with Kiki (Hayley Erin) has completely fallen apart.

As for Kiki herself, she’ll make a daring move. Kiki will choose to go after what she wants, but does that mean Griffin (Matt Cohen)? She seemed nervous when he kept calling her beautiful, but she could warm up to a closer connection soon. Perhaps Kiki will want to move out of the friend zone.

Back with Nina, she’ll battle some serious nerves. There’s a good chance a meeting with Sasha will be scheduled, but will she actually show? Valentin will get some bad news later, so this reunion may be a bust! Finally, there’ll be more “Friz” family drama. Aiden (Jason David) will run into some trouble in school, so Liz (Rebecca Herbst) and Franco (Roger Howarth) will have to tackle the crisis.