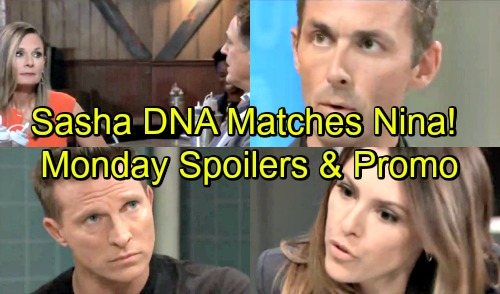 General Hospital (GH) spoilers for Monday, October 1, tease that some tough conversations are on the way. Before we dive in, here’s a reminder that Thursday’s preemption threw off the GH schedule. The episode that was supposed to air Friday will now air Monday. Just keep that in mind if you’ve been looking forward to previous spoilers – like ones about Laura’s (Genie Francis) return.

A glimpse of Laura was planned for Friday, but now that’ll be happening in Monday’s episode. After Ryan (Jon Lindstrom) deals with more of Lucy’s (Lynn Herring) pestering, he’ll return home and plot something sinister. Kevin will seemingly contemplate a strangling, so maybe he’ll want to murder Lucy! She may regret becoming an annoyance if this keeps up.

Fortunately, Laura’s arrival will break Ryan’s deadly trance. He’ll be stunned when he opens the door and finds Kevin’s (Jon Lindstrom) wife standing there. These two will have a lot to talk about by the time Tuesday rolls around. General Hospital fans can expect “Kevin” to raise some red flags, but he’ll do his best to convince Laura he’s the real deal.

For now, Nina (Michelle Stafford) will open up to Lulu (Emme Rylan). She’ll talk about her decision to divorce Valentin (James Patrick Stuart), but Lulu will sense that Nina’s still in love with him. Nina should admit that, but it doesn’t change what Valentin did. She’ll suggest that she just can’t get past all the Peter (Wes Ramsey) drama. Nina can’t believe Valentin would put an innocent child in harm’s way.

Naturally, Nina will continue fretting about her long-lost kid. While she hopes for a reunion, Curtis (Donnell Turner) will deliver the DNA results to Valentin. They’ll take a look and determine that Sasha’s (Sofia Mattsson) a match with Nina. The second test will back that up pretty soon. However, General Hospital spoilers hint that some twists are looming, so it’s wise to be wary.

Elsewhere, Mike (Max Gail) will seek Carly’s (Laura Wright) help. She’ll wonder if this is really what he wants, so he’ll assure her that it is. Mike will think they need to talk about what happens next. This could be about his move to a memory care facility, but there’s a chance it involves the Margaux (Elizabeth Hendrickson) mayhem instead.

Mike may want to take the fall if possible. After all, Sonny’s got a lot more life left to live. Mike’s mental health is declining rapidly anyway, so he may hope to make things up to his son. Sonny would never go for the idea, which works out since Margaux’s hot on his trail anyway.

Across town, Margaux will get in Jason’s (Steve Burton) face and make some startling accusations. She’ll argue that Sonny pulled the trigger and Mike covered it up. General Hospital spoilers say Jason will play it cool and pass along updates to Sonny. The walls are closing in, so this crew needs to think fast.

GH fans will want to check out all the action on Monday. We’ll keep you posted as other news comes in. Stay tuned to the ABC soap and don’t forget to check CDL often for the latest General Hospital spoilers, updates and news.