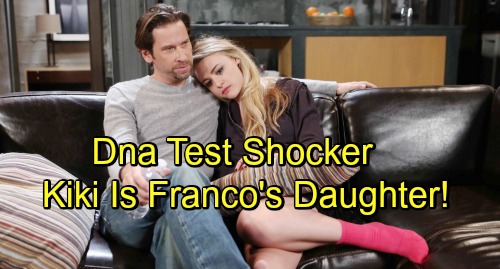 If so, Valentin may decide a paternity test would prove his claims and fully convince Sasha. Nina ex and her daughter’s father, Silas Clay (Michael Easton), has been dead for several years. That only leaves Silas’ other daughter, Kiki Jerome (Hayley Erin), to test against.

Normal paternity tests would only be able to match a female’s DNA to her mother or other female relatives. Fortunately, a recent breakthrough might help Valentin out. He could opt for autosomal DNA testing, which checks beyond a person’s X and Y chromosomes. This type of testing includes the other 22 pairs of chromosomes and is often used in genealogical research.

Valentin may not be able to prove Sasha’s paternity, but he could prove she’s a relative of the Clay family. If for some reason there are no records of Silas’ DNA being tested, there should be some of his psychotic brother. GH fans who also watched Port Charles, General Hospital’s spinoff, will remember the Stephen Clay (Michael Easton) character as Caleb Morley. He was an actual vampire on that show.

When Silas first appeared on GH, he was thought to be Stephen. Silas explained that Stephen suffered a psychosis, which caused him to believe he was a vampire. As for the paternity test situation, Silas probably had one done himself at some point. He would’ve wanted to make sure Kiki was actually his.

Silas took a sample and so did Patrick Drake (Jason Thompson), who was going to remove Franco’s brain tumor. That means there should be records at GH of Franco’s genetic materials. Of course, a shady new lab tech arrived around that time. Brad Cooper (Parry Shen) was often paid to alter lab tests and spread false info.

It’s possible Ava bribed Brad into listing Silas as the father instead of Franco. She was chasing after Silas during that phase of her life, so the move would make sense. If Valentin and Curtis start digging, they may realize something doesn’t add up. Perhaps Kiki’s DNA won’t be a match for Silas or anyone in the Clay family. Instead, Kiki could be Franco’s daughter after all!