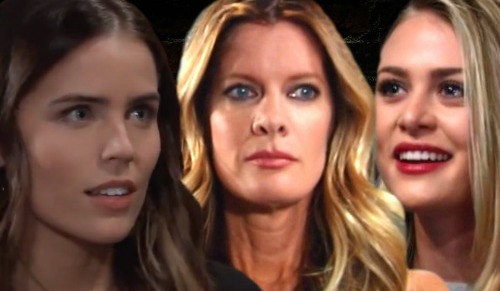 General Hospital (GH) spoilers tease that Nina (Michelle Stafford) has some big news headed her way. Valentin (James Patrick Stuart) and Curtis (Donnell Turner) have been working on a plan behind Nina’s back. To be fair, they only did it to protect her. Valentin certainly didn’t want to get Nina’s hopes up about finding her kid. If the search hadn’t panned out, Nina would’ve been devastated all over again.

Fortunately, Valentin won’t have to keep the secret much longer. After both DNA tests confirm Sasha (Sofia Mattson) as Nina’s daughter, he’ll provide some positive updates. At first, Nina will have her doubts about Valentin’s info. She’ll probably fear this is some ploy to get her back. When it comes to Valentin, Nina can never be too careful! General Hospital fans know Valentin’s awfully crafty.

However, Valentin will assure Nina that he’s telling the truth. He’ll offer the DNA tests as evidence and point out that Curtis was involved. Since Nina considers Curtis a trustworthy friend, she’ll finally let herself believe this is happening. Nina will definitely struggle with her emotions. Part of her will be relieved and excited to meet her long-lost daughter. Another part of her will be shaken and terrified.

Nina didn’t know this daughter existed until recently, but she’ll still worry about resentment. She wasn’t there for her child, so she may think conflict is brewing. Sasha didn’t seem interested in forming a relationship, which could be a factor, too.

Will Sasha change her tune once she learns Nina is her biological mother? Will she initially reject Nina instead? Nina will have to mull over those questions as she prepares for what’s next. Of course, we have to wonder if GH will let these DNA results stick. There’s a reason they threw in all those clues about Kiki (Hayley Erin) being Nina’s kid. They have to follow up on those at some point.

Shelly Altman, one of GH’s co-head writers, offered one more clue in the new issue of Soap Opera Digest. She talked about the moment when Nina accepts the daughter info as fact. “Curtis is credible in Nina’s eyes,” Altman said. “If Curtis says it’s true, and if not one but two DNA tests say it’s true, then maybe it is true.”

The key word there is maybe! Altman didn’t seem to be treating this information as a done deal. General Hospital spoilers say more bombshells are brewing in this storyline, so perhaps Valentin’s being duped. We’ll keep you posted as other GH details emerge. Stick with the ABC soap and don’t forget to check CDL often for the latest General Hospital spoilers, updates and news.