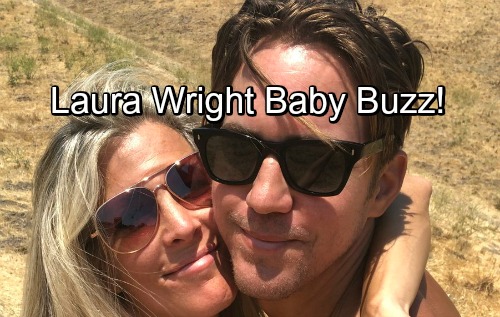 General Hospital (GH) spoilers reveal that one ABC soap star had to address some pregnancy buzz. It’s no secret that Laura Wright (Carly) and Wes Ramsey (Peter) are an offscreen couple. On social media, Wright posts plenty of great pics and compliments about her hunky beau.

Ramsey and Wright almost never get to share scenes on GH, but they’re nearly inseparable when it comes to their relationship. That’s why a recent tweet had General Hospital fans flipping out! Wright had a peculiar craving, so she decided to share her thoughts on Twitter. Since that’s something that’s typically associated with pregnancy, some viewers suspected Wright might have a bun in the oven.

Wright tweeted, “Why am I craving french toast??? I NEVER eat french toast !!!!!” It didn’t take long for her followers to share pregnancy guesses. Wright ultimately decided she’d better set the record straight before the gossip got out of hand. She sent out another tweet to clarify that she’s not currently expecting Ramsey’s baby.

“Hey guys I’m not pregnant—- I was just craving french toast :)) that’s all,” Wright said. Just about everyone has craved the brunch staple at one point or another, so nobody can blame Wright for that. Of course, we can’t blame General Hospital watchers for their wishful thinking either! People love baby news, so they naturally wanted to believe Ramsey and Wright would be expanding their family.

Alas, it sounds like there are no baby plans at the moment. Wright cleared up the confusion, so she’s probably hoping everyone will move on. On another note, could Peter and Carly finally get to share a story soon? General Hospital spoilers say the Ryan (Jon Lindstrom) drama could create some opportunities for Ramsey and Wright’s characters to cross paths, so that might be interesting.

What do you think about Laura Wright’s breakfast and baby drama tweets? Would you like to see Peter and Carly in some scenes together down the road? We’ll give you updates as other GH details emerge. Stay tuned to the ABC soap and don’t forget to check CDL often for the latest General Hospital spoilers, updates and news.