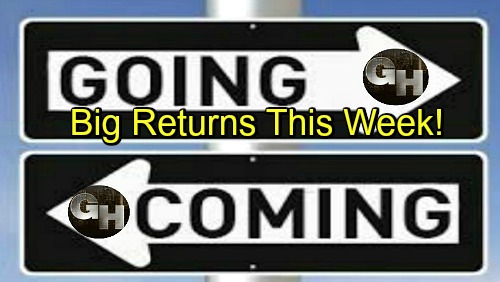 General Hospital (GH) spoilers tease that we’ve got some comings and goings to pass along. For starters, Kevin (Jon Lindstrom) will be back this week, July 23-27, after a brief trip to see Laura (Genie Francis). Since these newlyweds didn’t get much of a honeymoon period, it’s nice that they’re including some visits in the story.

Poor Carly’s been stuck in a strait jacket in a padded room. She’s also heavily sedated round the clock, so Kevin will return to a real mess. General Hospital spoilers say Sonny (Maurice Benard) will confront the doc about ditching Carly. He’ll be furious about the harsh treatment, especially since Dr. Lasaris (Casey Biggs) has something even worse in mind for Carly soon.

Meanwhile, Robert (Tristan Rogers) will be back in PC for a couple hot stories. For starters, Robert will want to help put Peter (Wes Ramsey) away. After Finn (Michael Easton) rescues Peter and gets him the help he needs at GH, Robert will hope he can lock the criminal up.

However, another case will eventually become the priority. Anna’s (Finola Hughes) missing, so Robert will want to pitch in after Finn finds out. They should work together on an exciting mission. Finn and Robert will ultimately realize Anna’s been kidnapped, but it’ll take some work to uncover clues about her whereabouts. General Hospital fans won’t want to miss this epic adventure.

Finally, Billy Miller (Drew) has landed an intriguing new role. He’ll be playing Alex Dunn on Apple’s new thriller drama series, Are You Sleeping. Miller’s part is recurring, so he should have time to fit GH in his schedule for now. Of course, things could certainly change down the road. Soap casting shakeups seem to be the norm these days, so it’s a good idea to prepare for anything!

That’s it for comings and goings. We’ll give you updates as other GH news comes in. Stay tuned to the ABC soap and don’t forget to check Soap Opera Spy often for the latest General Hospital spoilers, updates and news.