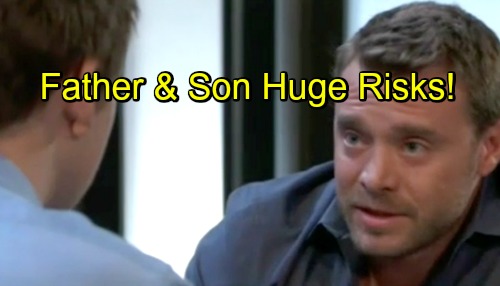 General Hospital (GH) spoilers tease that Oscar (Garren Stitt) could show great courage in the face of adversity. It’s clear that he’s reeling right now, but that’s to be expected. Oscar found out he had cancer in a very traumatic way. Kim (Tamara Braun) and Drew (Billy Miller) wanted to sit down for a gentle conversation with Oscar. Instead, Cameron (William Lipton) dropped the bomb out of nowhere.

Oscar will have a hard time coping with his diagnosis, but he should settle down sooner or later. Once Oscar’s ready to listen, Terry (Cassandra James) can go over his potential treatment. It’s a longshot, but there’s a clinical trial that could help Oscar. Of course, this seems crucial to the story. It’s doubtful GH would introduce this plot point if they intended to let Oscar die.

Instead, this could be a way to save Oscar and jumpstart another storyline in the process. Let’s consider how this might play out. Oscar will inevitably wrestle with what to do. After he found out Kim and Drew had been lying to him, he was furious. Oscar felt like he should’ve been informed of his tumor right away. He piped up that it’s his life, so that should come into play during this next part.

Drew and Kim are on board with the treatment idea, but they’ll undoubtedly let Oscar decide his fate. He could be rushing himself toward an early death with this clinical trial. Some patients died from it, so it’s definitely risky. However, it’s also Oscar’s last chance at survival. If he doesn’t take it, he’ll be giving up any hope of a future.

Oscar may determine that he has to go for it. That could easily inspire Drew to take a risk as well. Margaux (Elizabeth Hendrickson) may eventually feel guilty enough to come forward with the flash drive. Once Drew gets his hands on it, that’ll reduce the risks associated with his memory procedure.

Drew was planning on erasing Jason’s (Steve Burton) memories without anything to replace them. That wasn’t the best idea, so he ultimately backed out. After Drew’s own memories surface, he’ll boost his chances of success significantly. It’ll be less likely that he’ll emerge from the procedure in a vegetative state.

Seeing Oscar’s courage could make Drew want to take action. Then again, Drew might even make a deal with his son. He could suggest that some risks in life are worth taking. Drew may vow to go through with the memory procedure if Oscar goes through with the clinical trial. General Hospital could bring them together and move these hot plots along.

Many GH viewers are anxious for Drew to recall his history. The timing would be perfect since Drew’s been growing closer to Kim. They’re connecting over their sorrow, so throwing in some romantic memories might spark a reunion.