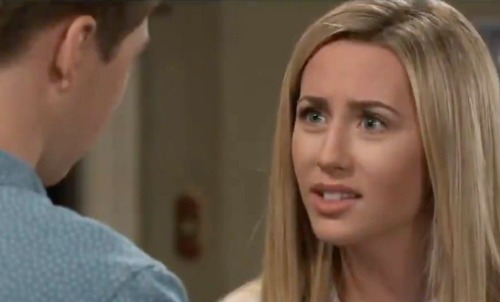 General Hospital (GH) spoilers tease that Cameron (William Lipton) will face more pressure. Josslyn (Eden McCoy) can tell that something’s up with Oscar (Garren Stitt), but she’s not sure what it is. All she knows is that Oscar went off the rails after his chat with Cam. Joss will keep her efforts to pry the truth out of Cameron, but he’ll stay tight-lipped for now. He won’t want to make things harder on Oscar.

Kim (Tamara Braun) kept Oscar’s diagnosis from him for two years, so he’s truly reeling right now. This devoted mom just wanted Oscar to have a normal life for as long as possible. Unfortunately, Kim also robbed Oscar of a truly fulfilling one. How many hours has Oscar wasted? If he’d known about the tumor, he probably would’ve traveled the world and spent less time on his phone.

Oscar might’ve even skipped his GH romance with Josslyn. He’ll inevitably feel like he set her up for heartbreak and loneliness. That’s why Oscar may form a plan to take care of Josslyn, even after he’s gone. Oscar may ask Cameron to watch over Josslyn and give her all the love she deserves. He may give Cam his blessing to move forward with Joss as soon as she’s ready.

In fact, Oscar may set this in motion before the death he expects. He could keep Josslyn at a distance and push her toward Cameron instead. Oscar might even dump Josslyn for her own good. He’d probably rather split up than reveal his fatal condition.

Oscar may believe it’d be better for Joss to find out about his demise after it happens. He won’t be thinking clearly, so he’s bound to make some ill-advised moves. Still, Cameron may argue that Josslyn deserves the whole story. General Hospital spoilers say Cam will put his foot down on October 4. He’ll tell Oscar that he’s not going to lie for him anymore.

Oscar may have no choice but to come clean, but he could still stick to the breakup plan. Here’s where the situation could get tricky. Since Terry (Cassandra James) brought up that clinical trial, that may be what saves Oscar from a tragic fate. By the time he realizes he’s got more life to live, will it be too late? Perhaps Josslyn will already have fallen for Cameron by then.