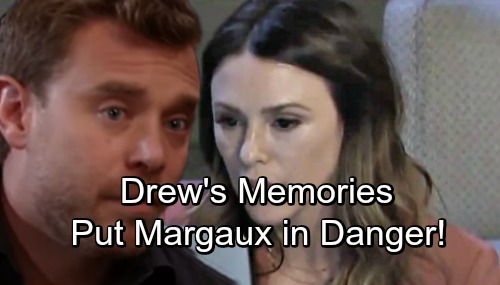 General Hospital (GH) spoilers tease that Drew Cain’s (Billy Miller) past contains some dark secrets. He’ll soon discover that Margaux Dawson (Elizabeth Hendrickson) has the flash drive, which holds his memories along with Jason Morgan’s (Steve Burton). However, Margaux still has a chance to reveal the shockers to herself first.

If Margaux figures out how to read the memories on the flash drive, what will she learn? Do Drew’s secrets involve his Navy days or perhaps his time on Cassadine Island? It might even be a bit of both! Margaux could add to her deception by hiding Drew’s history from him. That’d set up even more drama once the truth comes out.

Drew isn’t a big fan of lies, especially not ones about something so huge. He’s been desperate to get a sense of who he is and how he became that man. Margaux will be adding to his struggles by leaving Drew in the dark.

Even though Drew doesn’t remember being a Navy SEAL, he must know he was entrusted with plenty of secrets. Drew undoubtedly went on lots of missions that had to be kept under wraps. He had sensitive information that was meant for Navy personnel only.

If Margaux accesses that kind of info from his memories, Drew may be the least of her worries! She could have JAG (Judge Advocate General’s office, the legal entity of the US Navy) breathing down her neck for theft of state secrets. Then again, some enemy the SEALs were after could end up targeting Margaux over what she knows.

We should also consider Drew’s memories from Cassadine Island. GH fans know there are probably more living Cassadines than just Valentin (James Patrick Stuart), Spencer (Nicholas Bechtel), Alexis Davis (Nancy Lee Grahn) and her daughters! After all, one of them kidnapped Cassandra Pierce (Jessica Tuck) not too long ago.

Margaux could easily stir up some Cassadine chaos and possibly get the WSB riled. She’s not likely to find many memories of Jason’s for the five years he was held in the Russian clinic. If Margaux thinks she can uncover something to prosecute Peter August (Wes Ramsey) with, she may be out of luck. It’d be out of Margaux’s jurisdiction anyway, so she’d just get the WSB on her bad side with all the trouble.

Margaux is one ambitious woman, but she may want to tone it down a bit. She could cause some serious issues for herself if tries to use Drew’s secrets to her advantage. General Hospital spoilers say the excitement’s about to rev up, so we’ll give you updates as other news comes in. Stick with ABC’s GH and don’t forget to check CDL often for the latest General Hospital spoilers, updates and news.