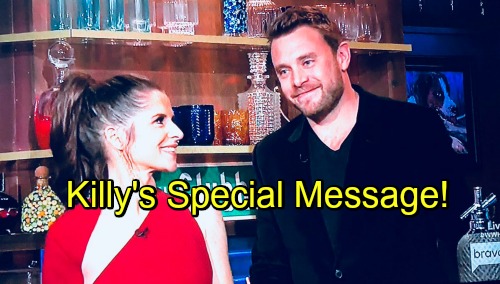 General Hospital (GH) spoilers reveal that Drew (Billy Miller) and Sam (Kelly Monaco) may not be a couple anymore, but their portrayers remain quite close. Miller likes to steer clear of social media and Monaco only posts things occasionally, but they recently made an exception. It was Miller’s birthday, so Monaco had to get in on the fun and share some cute pics with GH viewers.

Monaco posted a shot of Miller in a crazy birthday mask and party hat. He was chilling on the sofa with a funny pose, which seems to fit his usual personality. There was also a banner for his b-day in the background, so the room was decked out for a celebration.

“Enjoy the last year of your 30’s…” Monaco said. “Happy Birthday #billymiller Thanks @ToGoSpa for the face mask! He’ll need a lot more of these from here on out.” Monaco continued the teasing in a follow-up tweet. She provided a closer look at the mask and said, “#billymiller, you don’t look 39…. under all of that. #gh #imadehimdoit ;)” It sounds like Miller was really behind the mischief!

Many General Hospital watchers were undoubtedly thrilled over the new content. “Killy” and “Dream” supporters were going through serious withdrawals for a while. Since Drew and Sam aren’t an item on screen, their fans were surely anxious for some behind-the-scenes stuff.

It was difficult when Sam and Drew divorced, but there’s still loads love out there for the duo. On the bright side, there have been more “Dream” scenes than usual lately. Due to Oscar’s (Garren Stitt) terminal condition, Drew needed a shoulder to cry on. He won’t keep crying on it for long, but at least Sam was there when he needed her.

A reunion is always possible down the road, but Sam and Drew will stay connected no matter what. They’ve got Scout and Danny (T.K. Weaver) to keep them in each other’s orbit. Speaking of Danny, his portrayer had a birthday on the same day as Miller. Weaver tweeted out a sweet message to his former TV dad and now TV uncle.

“I owe this amazing man so much,” Weaver said. “He believed in me to be Danny Morgan. Forever grateful.” General Hospital spoilers say even more drama’s brewing in Port Charles, so don’t miss all the action. We’ll give you updates as other GH news comes in. Stay tuned to the ABC soap and don’t forget to check CDL often for the latest General Hospital spoilers, updates and news.