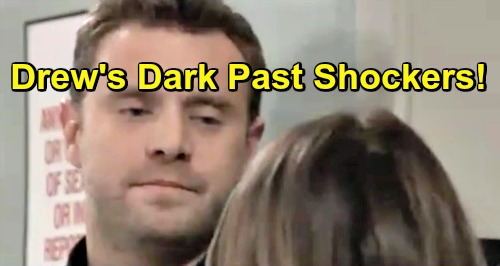 General Hospital (GH) spoilers tease that Margaux (Elizabeth Hendrickson) will hope her gesture pays off. She wants to take a step toward making amends with Drew (Billy Miller), so handing over the flash drive it a nice start. Margaux assured Drew that it wasn’t all about scheming for her. She’d genuinely like to be friends, but she’s giving Drew what belongs to him no matter what.

Margaux offered Drew the flash drive containing his memories, but he’ll turn it down on Monday. Drew will basically tell Margaux thanks, but no thanks. He’ll want to focus on his future instead of exploring the unknown. There are too many risks associated with this flash drive, so Drew won’t even want to possess it.

Naturally, Margaux will be surprised by Drew’s reaction. After the way he ranted about her keeping the flash drive, you’d think he’d want it back. Of course, Drew does indeed want it deep down. He’ll just be letting fear control him in that moment, so Margaux will push him to take his shot.

General Hospital spoilers say Drew will have to be honest with himself. His rejection of this peace offering will leave Margaux with questions. She’ll ask Drew what he’s so afraid of, but he may not give a solid answer. Drew undoubtedly has many fears, including the possibility that he’ll lose the memories he’s made since coming to Port Charles. He certainly doesn’t want to forget his family.

However, there’s most likely a deeper reason for this fear. Drew doesn’t know what’ll be waiting for him if he gets the memory procedure. If all goes well, Drew could remember a completely different life. GH fans know he was was a Navy SEAL, so you can bet Drew’s seen some things he’d rather not recall. There could even be some dark secrets could turn Drew’s world upside down forever.

Drew has no idea what he’ll be up against and that has to be terrifying. Something horrible could be buried in his past, so ignorance is bliss right now. Nevertheless, Drew will get over the shock of Margaux’s gift sooner or later. He’ll accept the flash drive and take a little more time to mull over what he wants.

There’s a good chance Drew will have the procedure done at some point. He may decide that not knowing is worse than whatever he might recall, but we’ll see about that! General Hospital spoilers hint that some shockers could leave Drew reeling once his memories come flooding back.

Will Drew’s history be darker than anyone anticipates? What secrets are lurking just under the surface? We’ll give you updates as other GH news comes in. Stay tuned to the ABC soap and don’t forget to check CDL often for the latest General Hospital spoilers, updates and news.