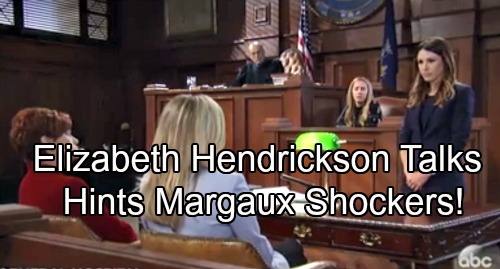 General Hospital (GH) spoilers say fans are still buzzing about Elizabeth Hendrickson’s debut as DA Margaux Dawson. Many viewers are anxious to see what’s ahead for this feisty prosecutor. It won’t be long until Margaux interacts with a few more characters and gets involved in other storylines. GH intends to establish some interesting connections, so it should be fun to watch it all unfold.

In an interview with Soap Opera Digest, Hendrickson dished on her new role and provided some hints about the future. She started by admitting that she was nervous to tackle Margaux. This character’s quite different from the ones Hendrickson’s played in the past, but she thinks that’s a good thing.

“I was so afraid, but I’m being challenged in a way that I’ve never been challenged before,” Hendrickson said. “It feels totally new and I’m discovering a lot about myself as an actress in the process.” Hendrickson seems to be the perfect fit for Margaux. She’s got the no-nonsense demeanor down pat in her courtroom scenes.

Nevertheless, Margaux should warm up once she takes a breather from legal drama. Since Hendrickson used to work with Billy Miller (GH’s Drew) on The Young and the Restless, fans of their old pairing are hoping for a new version. There’s certainly a possibility that Drew and Margaux will feel a spark.

Hendrickson is up for crossing paths with her former costar. She enthused, “Billy is one of my favorite men that I’ve ever played opposite…of course I would love to share scenes with him!” However, it seems Hendrickson’s a bit spooked by the soap crazies out there. We all know some General Hospital watchers tend attack actors just for doing their jobs.

“I would just like to stress that I am not trying to get on GH and come between him and Sam,” Hendrickson said. “I am not gunning to break up any supercouple…I don’t want the fans to get mad at me!” Some viewers would argue that Sam (Kelly Monaco) and Jason (Steve Burton) deserve the supercouple status. It’s a tricky situation that will only get trickier after Drew’s memories return.

Hendrickson revisited the fan backlash odds later in the interview. She suggested that it’d be nice to be adored, but it seems she’s not holding her breath. Hendrickson admitted, “Somehow, I get cast in roles that are doing things to the fans’ favorites that really don’t sit well with them!” She asked everyone to go easy on her since she’s just acting out what the writers have written.