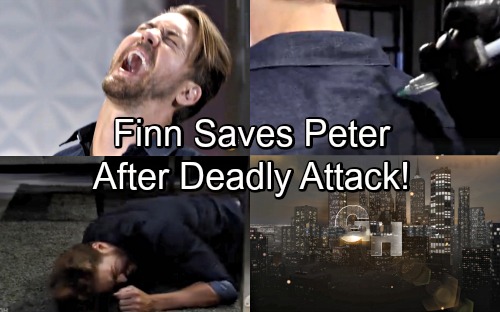 General Hospital (GH) spoilers tease that Peter’s (Wes Ramsey) life will soon be in grave danger. Once he’s released at the PCPD, Peter will likely head home to sulk. He’s lost his chance with Maxie (Kirsten Storms) and she was clearly the only thing that mattered to him.

Peter will want to wallow in his despair and fume about Anna’s (Finola Hughes) role in his suffering. He’s not ready to give her a pass for her actions. Valentin’s (James Patrick Stuart) the one who handed Heinrik over to Faison (Anders Hove), but Peter still feels abandoned by his mom. He’s got major issues with Anna and they won’t be resolved quickly.

However, Peter will only have survival on his mind when he’s attacked from behind. A mysterious assailant wearing black gloves will jab a syringe into Peter and inject him with something that could be deadly. Liesl Obrecht (Kathleen Gati) makes sense as a potential attacker, but we can’t rule out Valentin (James Patrick Stuart). He’s livid with Peter for turning Nina (Michelle Stafford) against him and destroying his family.

Jason (Steve Burton) would also love to take Peter out, but guns are more his style plus he wouldn’t stab someone in the back. The syringe seems like the ideal weapon for Dr. O, but anything can happen on the ABC soap. Regardless, the important part of all this is the peril for Peter. His foe may walk away and assume this lethal mission’s been accomplished.

Fortunately, we know Peter will pull through this ordeal. There’s much more to explore in his storyline and GH needs him alive to do that. Someone will inevitably come to Peter’s rescue, but which character will it be? Finn (Michael Easton) might be a good option.

General Hospital spoilers say Finn’s timing will be perfect on the new GH episode, Monday, June 4. Perhaps he’ll track Peter down in hopes of making progress for Anna’s sake. Finn knows how much Anna wants a relationship with her son, so Finn may think he can help her out. Instead, he could pitch in by saving Peter’s life!

What better way to seal the deal on Finn and Anna’s romance? It’d be so soapy for Finn to earn Anna’s deep gratitude by rescuing her son. Finn might spot Peter dying on the floor and leap into action. He could be the reason Peter lives to bond with his mom someday soon.

Will Finn be the one to save the day? Will Peter’s near-death experience soften him at all? Is there room in his heart for Anna? We’ll give you updates as other General Hospital news comes in. Stay tuned to ABC’s GH and don’t forget to check CDL often for the latest General Hospital spoilers, updates and news.