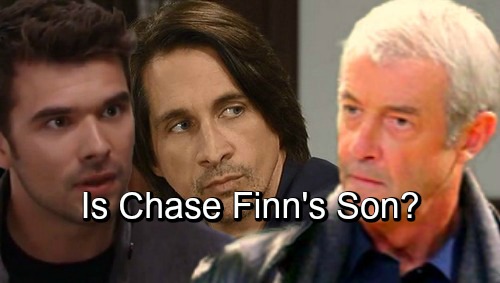 General Hospital (GH) spoilers tease that Finn (Michael Easton) will get a nice surprise. On GH’s new episode, Thursday, October 25, something will catch him off guard in a good way. Perhaps Anna (Finola Hughes) will come up with some unexpected plans. She might rev up the romance and make sure Finn doesn’t forget about their intense spark.

Of course, this could also have something to do with Gregory’s (James Read) case. After pinpointing the problem, Finn referred Gregory to another doctor. His dad objected, but Finn felt like he’d fulfilled his obligations. Despite their issues, it’s still be a nice surprise if Gregory responded to treatment rapidly.

Finn isn’t a big fan of Gregory or his stepmom, but he always loves a good success story in medicine. He’ll be glad to know if Gregory’s health is back on track. There’s even a chance Chase (Josh Swickard) will reach out and bring that surprise we mentioned. Regardless, Finn will like the shocker in his future.

Unfortunately, the next one won’t be as pleasant. General Hospital spoilers say Anna will have a new idea next week. When she reveals it to Finn, he’ll immediately express concern. Finn may try to shut down Anna’s scheme and get her focused on something else. Will that be for her protection or his own?

It’s possible Anna’s plot will involve Cassandra (Jessica Tuck) chaos or even Dr. Liesl Obrecht (Kathleen Gati). Finn wouldn’t be happy about Anna going off on a mission and putting herself in danger. They’ve already been over this topic, but it’s not like Anna’s going to let Finn stop her. She does what she wants and that’s just how GH viewers like it.

However, Anna’s mission may not be all that risky – at least not in terms of life-threatening searches and encounters. Could it be about bringing Finn’s family together instead? No lives would be on the line, but there would certainly be emotional risks in that case.

General Hospital spoilers say buried secrets are rising to the surface. It’s only a matter of time before they explode and cause serious damage. Finn’s bombshells seem to tie in with his stepmother specifically. Were they an item once upon a time? Did she get pregnant and marry Gregory quickly to cover it up? Is Chase actually Finn’s son?

Those theories are gaining traction, so GH fans will see how it goes! We’ll give you updates as other General Hospital news comes in. Stay tuned to the ABC soap and don’t forget to check CDL often for the latest General Hospital spoilers, updates and news.