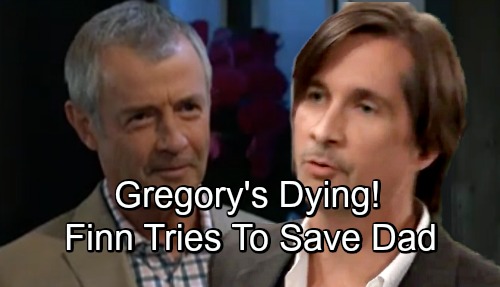 General Hospital (GH) spoilers tease that Anna (Finola Hughes) will once again get caught in some family drama. She was recently on hand to witness some tension between Finn (Michael Easton) and his father. Gregory (James Read) showed up just before Finn’s dinner with Chase (Josh Swickard), so Finn felt like he was being ambushed.

The good news is it wasn’t a dirty trick. The bad news is Gregory could be dying! He needs to see the best infectious disease specialist in the country. Although Gregory downplayed his illness, it could actually be quite serious.

Now Finn’s going to face a tough task. General Hospital spoilers say he may consider backing out of their earlier agreement. Finn agreed to see Gregory as a patient, but following through on that promise will come with complications.

Naturally, Chase will be concerned about his dad. He cares about Gregory a great deal, so he’ll just want Finn to help him recover. Anna will want the same thing. She’ll hope Finn and Gregory’s relationship can somehow be salvaged.

Anna’s also hoping she can form a bond with Peter (Wes Ramsey), so that could be a factor here. She may think that if Gregory and Finn can come together, maybe Peter can come together with her, too. Regardless, Anna will end up meeting with Chase this week. She might suggest that he should talk to Finn privately and convey how much treating their dad would mean to him.

Later, General Hospital spoilers say Anna will offer her gratitude. She’ll thank Chase for his help, so perhaps he’ll vow to see what he can do. Chase may even set up another family meeting. If Finn’s going to be treating Gregory, it’d be nice if they could be on better terms.

Of course, Gregory’s potentially grim fate should be in the back of all their minds. Finn may realize that this could be his last chance to repair the damage. If he can’t save Gregory, he’ll run out of chances to make amends. GH spoilers state that Finn will have to overcome the hurdles of the past, but he’ll try to put his patient first. Gregory needs Finn more than anybody in the world right now.

Can Finn save Gregory’s life and patch things up? Will Chase, Finn and Gregory become a family again? GH viewers can expect Anna to keep pitching in, so stay tuned for her involvement. We’ll give you updates as other details emerge. Stick with the ABC soap and don’t forget to check CDL often for the latest General Hospital spoilers, updates and news.