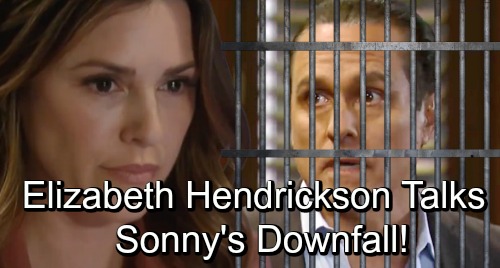 General Hospital (GH) spoilers tease that we’ll see an even fiercer side of DA Margaux Dawson (Elizabeth Hendrickson). From the moment Margaux hit town, she’s been breathing down Sonny’s (Maurice Benard) neck. Margaux’s been determined to bring down the mob boss, so many GH viewers suspected there was some secret vendetta behind her goal.

However, Margaux seemed visibly disturbed by the news of her dead father’s discovery. According to Margaux’s portrayer, the DA was completely caught off guard. Elizabeth Hendrickson dished on the drama in the latest issue of Soap Opera Digest. She suggested that if you thought Margaux was out to get Sonny before, you haven’t seen anything yet!

“She has been on Sonny ever since she got to Port Charles just because she has a strong belief in the law and that people should be held accountable,” Hendrickson said. “But she never imagined that he would be attached to her father’s murder. She didn’t even know for sure that her father was dead.”

Now that those human remains have been identified, there’s no denying the truth. Margaux’s father is deceased and someone’s got to pay the price. Of course, Margaux will hope that someone is Sonny. The initial clues have been pointing in Mike’s (Max Gail) direction, but it won’t take long for Margaux to shift her focus to his seemingly smug son.

Sonny will continue to play it cool, but he’ll be pretty rattled deep down. General Hospital spoilers say Margaux will form a theory next week and it’ll point straight to Sonny. She’ll decide she has to secure the evidence she needs and score some justice.

Hendrickson noted that Margaux can’t really grieve for a father she never knew. However, she CAN get vengeance. “There isn’t time for her to have a whole ‘How do I really feel about this?’ moment, other than ‘I’m going to avenge my father’s death,” Hendrickson admitted.

Margaux won’t be particularly concerned about whether Sonny actually pulled the trigger or not. She’ll just want him behind bars where he belongs. Of course, Sonny’s a powerful man with a violent past. Will Margaux be worried about that? Not a chance! “I don’t think that he scares her,” Hendrickson said. “And I don’t think anything is going to stop her.”

It sounds like this General Hospital storyline’s heating up. We’ll give you updates as other GH details emerge. Stay tuned to the ABC soap and don’t forget to check CDL often for the latest General Hospital spoilers, updates and news.