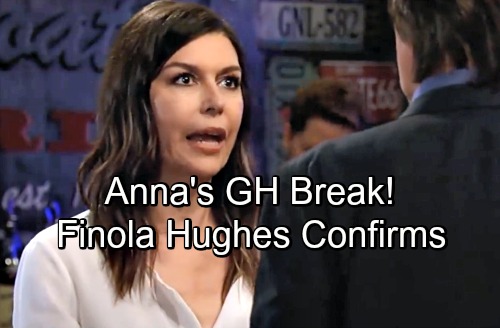 General Hospital (GH) spoilers tease that a summer mystery’s about to heat up. GH fans know Finola Hughes (Anna) usually takes a break this time of year. As a result, General Hospital writers have to come up with creative exit strategies. When Anna’s driver was spotted hiding a gun, viewers assumed a kidnapping would mark the beginning of Hughes’ vacation.

In a recent tweet, Hughes appeared to offer confirmation on that. She hinted that she’d be off screen for a while and left GH watchers with some important reminders. Hughes said, “See y’all on the flip side of summer! Please spend time with your families and have fun! And sunscreen, plenty of broad spectrum sunscreen….!!!”

Hughes chimed in on another shocker of the soap world as well. KFC has been live-tweeting GH lately and the results have been hilarious. A tweet about Anna was particularly amusing to many General Hospital viewers. KFC’s Twitter account exclaimed, “GET OUTTA THAT CAR ANNA! SAVE YOURSELF!!!”

General Hospital spoilers say Carly will remain in quite a bind, but it may be nothing compared to what’s ahead for Anna. Hughes stayed tight-lipped on who’s behind her abduction. She didn’t want to ruin the shockers GH has in store for us.

However, Valentin (James Patrick Stuart) is a likely contender. Liesl Obrecht (Kathleen Gati) might be a long shot and Cassandra (Jessica Tuck) should be in the running, too. Her name was mentioned for the first time in a while, so that’s always suspicious. Comas never keep GH baddies down indefinitely!

Death doesn’t either for that matter. Perhaps Faison (Anders Hove) could be considered as a potential abductor. Regardless, this opens the door to some interesting rescue possibilities. Finn (Michael Easton) will naturally want to save Anna. General Hospital spoilers say Robert (Tristan Rogers) is headed back to the show soon, so he can also help out.

If GH wants to kick off Peter’s (Wes Ramsey) redemption arc, he could even get involved at some point. Of course, he has to escape or be rescued himself first! It sounds like there’ll be loads of action and adventure happening this summer, so stay tuned.

Will you miss Finola Hughes while she’s gone? Who do think swiped Anna and which GH character will become her true hero? Will it be a team effort? We’ll give you updates as other news comes in. Stick with the ABC soap and don’t forget to check CDL often for the latest General Hospital spoilers, updates and news.