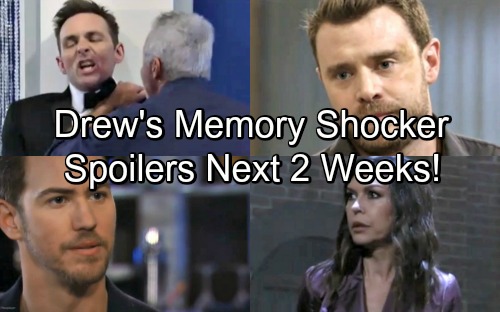 General Hospital (GH) spoilers for the next two weeks tease that we’ll see some chaos in Port Charles. The week of May 21-25 will bring growing fears. Now that Jason (Steve Burton) and Sam (Kelly Monaco) know the truth about Peter (Wes Ramsey), they’ll battle plenty of concerns. Maxie’s (Kirsten Storms) caught in Peter’s web and Anna (Finola Hughes) could certainly be in peril.

Jason will do his best to form a strategy. He may get in touch with Anna before her meeting with Heinrik. General Hospital spoilers state that Anna’s in for a real shock! However, Peter’s true identity won’t change her goal. Anna will still want to keep her son out of harm’s way. That means doing whatever she can to protect Peter from Jason.

Later, Anna will be incredibly upset. Her meeting with Peter will be delayed thanks to the birth of Maxie’s baby, but they could coordinate their schedules eventually. GH spoilers say Peter will unleash his wrath, so Anna will undoubtedly have trouble getting through to him.

Elsewhere, Nina (Michelle Stafford) will try to figure out what’s going on. After Robert’s (Tristan Rogers) outburst at the Nurses Ball, Nina will realize something’s seriously wrong. She’s already been suspecting it, but Valentin won’t be able to deny the trouble for much longer.

General Hospital say Nina will reach out to Lulu (Emme Rylan) soon. If Jason has filled Lulu in on Peter’s real identity by then, Nina may face a bombshell. The week of May 28-June 1 will deliver even more drama. Peter will realize he has a hint of power left, so he’ll use it to his advantage.

It looks like Drew (Billy Miller) will be gearing up for his memory procedure, so the flash drive would give Peter something to bargain with. Drew needs his memories back! Later, Sam (Kelly Monaco) will panic over what might happen. She’ll hate the thought of Drew never waking up, so she may advise against all this.

Franco (Roger Howarth) has formed a strange almost-friendship with Drew. It seems he won’t be entirely on board with this either. Liz (Rebecca Herbst), on other hand, will back somebody up. That could easily be Drew. Perhaps Liz will understand Drew’s reasons and suggest he should take the risk.

Andre (Anthony Montgomery) will make a last-ditch effort to talk Drew out of this. He’ll once again explain why this could be a terrible idea. Nevertheless, Drew’s probably moving forward with his plans no matter what.