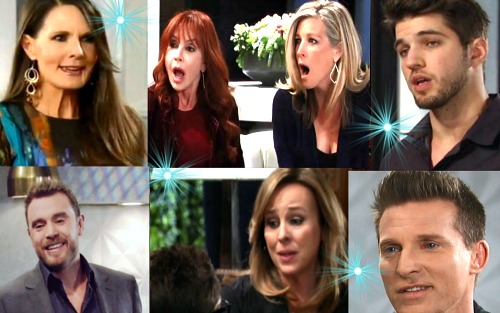 General Hospital (GH) spoilers tease that some fun moments are ahead in Port Charles. GH is gearing up for a big anniversary celebration on Friday, March 30. The ABC soap has been on the air for 55 years, so that’s worth acknowledging! A new promo featured interviews with cast members as well as Frank Valentini, GH’s executive producer. Some great shockers were spilled, so let’s talk about them.

First, Lynn Herring (Lucy) shared a hint about some comebacks. We’ll see some huge returns for this exciting episode. “It’s going to be very special,” Herring said. “You’ll have so many of your favorites back.”

Herring added that many of them got in trouble for catching up during certain scenes. She suggested that we should watch for some inappropriate giggles in the background. Next, Nancy Lee Grahn (Alexis) offered some clues about what to expect. She noted that this anniversary special will be both sentimental and lovely. Grahn promised that GH would include plenty of fond memories on Friday.

Wally Kurth (Ned) also indicated that he’s be belting out a tune for this celebration. He’s hoping General Hospital fans will like the song that’s on the way. Jacklyn Zeman (Bobbie) also weighed in on the plan for this episode. “The writers came up with a good one…a lot of characters are represented,” Zeman said.

Kristina Wagner (Felicia) had an interesting snippet in this promo, too. She assured viewers that Friday would be a real blast from the past. Wagner pointed out that the cast loved working on it. “The actors themselves really enjoyed doing it and are honored to be a part of it,” Wagner gushed. She mentioned that she had her own personal history with a particular set for this episode.

Finally, we should discuss Valentini’s interview clip. He suggested that Friday’s show will combine current storylines along with decades of history. “It all ties together with lots of surprises and some familiar faces,” Valentini said. “It’ll be a lot of fun.”