General Hospital Spoilers: Fresh Start for Sam – Should GH Give Up on JaSam and Let Another Love Story Bloom? 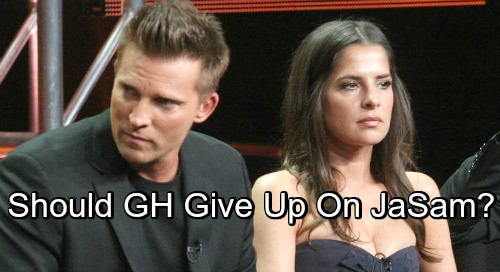 General Hospital (GH) spoilers reveal that some fans are eager for changes in Port Charles. Sonny (Maurice Benard) recently had a special episode that asked, “What if?” It featured several couple shakeups, including one for Sam (Kelly Monaco).

In Sonny’s dream, Sam was married to bold mobster Dante (Dominic Zamprogna). Many viewers saw some great chemistry, so it’s sparked a debate on social media. Is Jason (Steve Burton) really the one Sam’s meant to be with? There are several important factors to consider.

Of course, Sam and Jason have a classic love story. They’ve found their way back to each other after all this time, so there’s something sweet about that. Unfortunately, GH can’t seem to commit to a proper “JaSam” storyline. If they won’t go all in for whatever reason, maybe it’s time to try something else.

Does Sam need a new man? Dante isn’t an option since Zamrpogna’s appearance was a one-time deal. He isn’t back for good and even if he was, General Hospital would probably put him back with Lulu (Emme Rylan). However, Sam’s a lovely lady who could go with just about any eligible Port Charles bachelor. If her romance with Jason crashes and burns, it wouldn’t be hard for Sam to find love again.

GH fans aren’t keen on too many new characters, but they might accept one who was the perfect fit for Sam. Then again, General Hospital could turn to other options currently on canvas. They could even cheat a bit by making Sam’s new man sort of an old one.

Drew’s (Billy Miller) against the procedure at the moment, but we doubt that will stick. If Drew ultimately trades his Jason memories for his real past, he’ll be like a whole different person. Drew’s personality may not change too much, but his life experiences will shape his views and actions. We could see some big shifts in the character.

If Drew indeed goes through with this memory replacement, he’ll run the risk of forgetting Sam entirely. It might be fun to see how Sam would navigate that. She’d also have a chance to love Drew for who he really is. Sam could get to know him and fall harder than ever before.