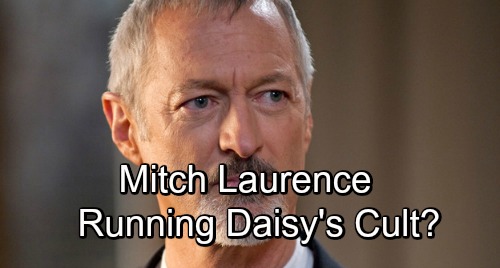 General Hospital (GH) spoilers tease that another bomb’s ready to drop in Port Charles. Llanview’s Mitch Laurence (Roscoe Born) could be behind the cult that Daisy (Kelsey Wang) seems to be actively recruiting for. Longtime GH fans who also watched One Life to Life will remember Mitch’s many vicious arcs. He’s one dangerous individual, so big trouble’s brewing if Mitch is involved here.

Oscar Nero (Garren Stitt) has already been sucked in by Daisy and Kristina Corinthos-Davis (Lexi Ainsworth) doesn’t seem far behind. Will they land in Mitch’s cruel grasp? Mitch was supposedly killed (for the final time) in the last few episodes of OLTL on ABC. He was shown being escorted to hell by two other deceased characters, but any death can be undone in the soap world.

Perhaps GH doesn’t even need an explanation at all. Sometimes when soaps are dealing with stuff that happened years ago, they just go for something simple. A “the reports of my death were greatly exaggerated” type of thing is a dependable excuse.

Of course, there’s another route General Hospital could take. If Mitch indeed died, maybe he passed the cult leadership on to his favorite disciple and enforcer. Her name was Alison Perkins (Barbara Garrick) and she was just as demented as her former leader. Alison would actually be a better soulmate for Ryan Chamberlain (Jon Lindstrom) than Ava Jerome (Maura West)!

It’s easy to imagine Mitch, Alison, or both fitting into Ryan’s storyline. All of them are murderous and insane, so there’s the setup for more Ferncliff drama. Alison or Mitch could’ve found themselves locked up.

Frank Valentini, General Hospital’s executive producer, has stated that he loves bringing OLTL actors and characters over to GH. He brought James DePaiva in as Dr. Bensch and before that, Rebecca Budig played Hayden Barnes. Valentini even let Nora Buchanan (Hillary B. Smith) make a couple of appearances.

Mitch and Alison could fit in the cult story as well, which could lead to a collision with Ryan’s plot. As Ryan’s murder total mounts, the PCPD may think they have a Manson family-like cult on their hands. It could draw attention away from Ryan and create the opportunity for more deaths.

However, we shouldn’t underestimate Mitch’s thirst for blood either. He just might call for some kills of his own! Mitch was also into programming, so his recruits might be brainwashed to do his bidding now, too. They could wreak havoc on PC, which could leave Oscar and Kristina in real peril.