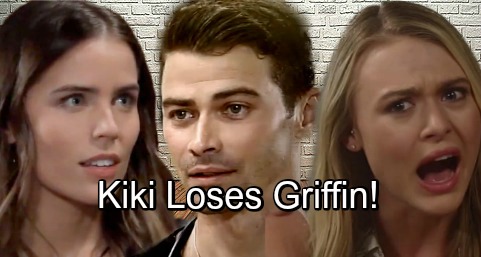 General Hospital (GH) spoilers tease that Griffin (Matt Cohen) will be tempted, but will he cross the line? During a session with “Kevin” aka Ryan (Jon Lindstrom), Ava (Maura West) made a bold prediction. She brought up her plan to make Kiki (Hayley Erin) feel the pain of betrayal and ultimately repair their broken bond. Ava feels confident that Griffin will break Kiki’s heart when given a nudge.

Is Ava right about that? She made some good points as she described Griffin’s actions. Griffin cheated on the church and then he cheated on Ava – sort of anyway. Technically, Griffin and Ava broke up a few minutes before his hookup with Kiki, but if he might as well be a cheater if he can’t wait longer than that. It seems Griffin just can’t help himself sometimes.

Sasha (Sofia Mattsson) and Griffin obviously get along quite well. He wants to be nice for Kiki’s sake, but there’s more to it than that. Sasha made a bold move when she encountered shirtless Griffin and held a cold water glass to his face. She let Kiki know he was thirsty and he just might be! After all, Griffin just stood there. He didn’t reject or act all that concerned about Sasha’s advances.

Perhaps that’s because Griffin enjoyed the attention. He’s been falling for Kiki, but Sasha is quite the seductress. If she keeps this up, Ava may end up being right. Will Griffin cheat and leave Kiki heartbroken? Since Kiki will likely be killed off by evil Ryan, General Hospital could set her up for a truly cruel exit. She may die feeling distraught and alone!

Ava and Kiki are already at odds, so that’s been a lot for Kiki to deal with. Now her new “sister,” is making passes at Griffin right in front of her. Like Kiki said, that’s just not OK. If Griffin actually betrays her, Kiki will feel like her world’s falling apart. She went through a terrible ordeal thanks to Dr. Bensch (James DePaiva), but she finally though things were looking up. Clearly, Kiki thought wrong!