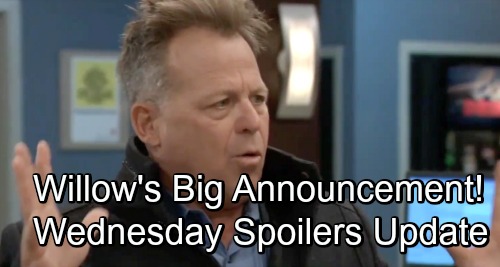 General Hospital (GH) spoilers update for Wednesday, November 14, tease Sasha (Sofia Mattsson) will push Valentin (James Patrick Stuart) to relax. He’ll tell her to leave town again, but Sasha will insist on staying put. She’ll mention how Valentin believes the truth will come out if she sticks around, but she’ll suggest he’s just being paranoid.

Sasha won’t think Nina (Michelle Stafford) will ever have a clue about their fake daughter plot. GH fans know Sasha will inevitably be wrong, but the big secret will stay under wraps for now. Laura (Genie Francis) will also find Sasha in her path on Wednesday. She’ll meet Nina’s pretend kid and perhaps develop a few strange suspicions.

Of course, Laura’s always a busy gal. She’ll find time to give Liz (Rebecca Herbst) some guidance as well, so expect an intense conversation. Liz will be struggling to handle Aiden’s (Jason David) issues, but Laura will give her a pep talk. She won’t think Liz should feel pressure to be the perfect parent. Certain things are beyond Liz’s control, so she just has to roll with the punches and make an effort.

At Aiden’s school, Willow (Katelyn MacMullen) will excitedly announce career day. Thanks to Franco (Roger Howarth), it appears Scott (Kin Shriner) will be roped into making a speech. The kids may not be all that interested in his life as an attorney, but Scott should do his best to get their attention.

As for Aiden, he may continue to withdraw from his classmates. General Hospital spoilers say Liz will take action later this week, so some sort of incident may spark that. You can bet Liz will do everything in her power to help Aiden adjust. She’ll just want her sweet boy to be happy and confident.

Other General Hospital spoilers state that Curtis (Donnell Turner) will seek an explanation. He’ll ask why Nina still hasn’t RSVP’d to his looming nuptials. Curtis is thrilled to be marrying Jordan (Briana Nicole Henry), so he wants all his loved ones there to watch. Nina’s included in that group, so Curtis will wonder why she’s dragging her feet on attending.

Valentin has slowly been making progress with Nina, but she’s hesitant to truly open her heart again. GH viewers know that’s a good thing since Valentin’s lying to Nina as usual! However, Nina’s conflicted feelings might be to blame for her RSVP holdup. She may not feel like she can take Valentin as her plus one, but shoving him to the side for someone else may not work either.

Across town, Maxie (Kirsten Storms) and Peter (Wes Ramsey) will talk about their own plus one plans. Based on Peter’s comments, Maxie will realize he’s contemplated attending with Nina. When he beats around the bush, Maxie will ask if Peter’s taking Nina to the wedding or not. That may not be his call if Nina doesn’t want to go!

Maxie will get irritated with Peter’s teasing, but it should all work out in the end. Maybe Peter will take Maxie and possibly turn this into a real date! We’ll give you updates as other news comes in. Stay tuned to the ABC soap and don’t forget to check CDL often for the latest General Hospital spoilers, updates and news.