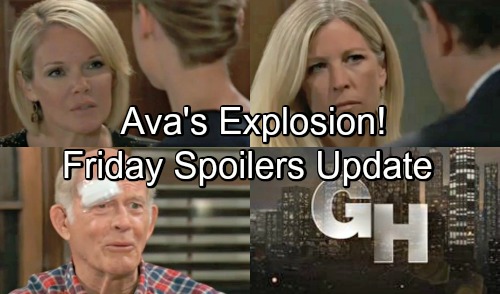 General Hospital (GH) spoilers for Friday, August 10, tease that Drew (Billy Miller) will offer reassurance to Oscar (Garren Stitt). GH fans know Josslyn (Eden McCoy) hasn’t been quite herself lately. When she’s not lashing out as Oscar, she’s putting distance between them. After Oscar opens up about his dilemma, Drew will suggest that she shouldn’t sweat it.

Josslyn has been pushing more than just Oscar away, so Drew will encourage his son to be patient and understanding. He’ll think it’ll all work itself out eventually. Over with Cameron (William Lipton), he’ll show off something that Joss thinks he stole.

She’ll freak and start hurling accusations, so Cam will have to defend himself. Whether he’s a thief or not, Cameron probably won’t think it’s a big deal.

Meanwhile, Carly (Laura Wright) will get a request from Kevin (Jon Lindstrom). He’ll note that therapy seemed to be helping Carly in Ferncliff, so she might as well keep it up. Kevin will make a tempting pitch, which means Carly may continue to bare her soul in some sessions.

Other General Hospital spoilers say Mike (Max Gail) will receive bad news. Sonny (Maurice Benard) knows Mike’s declining rapidly, so they have to prepare for what’s coming. Mike will inevitably end up in a facility sooner or later. It’d be better to tell Mike the truth and let him be involved in the process.

However, Mike will still be crushed after Sonny’s admission. He’ll feel like his son no longer wants him around, but this isn’t about getting rid of him. It’s about giving Mike the assistance he needs. Mike and Sonny’s relationship has grown a lot since the Alzheimer’s diagnosis, so that’s been the one bright spot of all this. Let’s hope Sonny can explain and keep Mike calm in Friday’s new GH episode, August 10.

At the police station, Chase (Josh Swickard) will bring up the topic of justice. During a conversation with Jason (Steve Burton), Chase will try to nudge him in the right direction. He may not get why Jason isn’t more fired up about destroying Peter (Wes Ramsey). The WSB shelved their charges and nothing stuck at the PCPD. Chase might contend that Jason could shift this case in a big way.

Of course, Jason is all about his loved ones. He’s in hot water for breaking Carly out of Ferncliff, so he’ll hope to get that cleared up. Once this legal drama’s over, Jason just wants to hang out with Sam (Kelly Monaco) and the kids. He’s been neglecting them a bit thanks to Carly’s ordeal, so they could use some “JaSam” family time.

At the courthouse, Griffin (Matt Cohen) will testify about his connection to Kiki (Hayley Erin). He’ll have to tread lightly as Alexis (Nancy Lee Grahn) asks if they’re just friends. That’s true now, but it wasn’t the night of the Nurses Ball! Griffin may be able to sidestep the sex issue, but Ava’s fury will be impossible to avoid.

General Hospital spoilers say Ava (Maura West) will back Kiki into a corner at some point. She’ll hint that maybe Kiki has something she’d like to share. Will Kiki realize Ava knows the truth? Regardless, you can bet there’ll be some serious tension between this mother and daughter.

GH viewers won’t want to miss all the excitement. We’ll give you updates as other details emerge. Stay tuned to ABC soap and don’t forget to check CDL often for the latest General Hospital spoilers, updates and news.