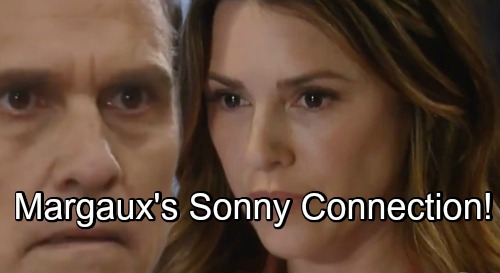 General Hospital (GH) spoilers tease that Margaux (Elizabeth Hendrickson) could have more than one secret. She managed to get her hands on the flash drive containing Drew’s (Billy Miller) memories, but she’s choosing to stay quiet about it for now. However, there must be a deeper reason for that. Margaux’s up to something, which could tie in with another shocker she’s hiding.

GH brought Margaux on the scene during Carly’s (Laura Wright) trial. From the get-go, Margaux was determined to make Carly pay the price. Of course, Sonny (Maurice Benard) believes Carly’s suffering was mostly because of him. Since Margaux couldn’t take down Sonny, she took her chance to hurt him through Carly’s punishment.

Now Margaux’s got a flash drive with a memory baseline for both Drew and Jason (Steve Burton). Since Jason is Sonny’s right-hand man and has been for years, he’s got enough knowledge to put Sonny away for his crimes. Margaux could do a lot of damage with her latest discovery, but what’s her real motivation? Any good DA wants to uphold the law, but why is Margaux so fixated on Sonny?

In a Twitter chat last month, Elizabeth Hendrickson talked about what she’d like to see for Margaux. “I hope we get to see a little bit about her past soon which will help reveal who she is under that poor suit,” Hendrickson said. She just might get her wish down the road.

Hendrickson admitted she was in the dark on any potential connections in Port Charles. She didn’t know of any at the time, but she suggested that General Hospital could throw one in later. That could be exactly what they have in mind. Margaux’s just a little too determined here. Why is Sonny different than any other mobster or criminal in town? It seems like Margaux has a specific reason to target him.

Let’s consider what that reason might be. GH put the Croton body storyline on hold for Nelle’s (Chloe Lanier) exit, but that drama will come back into play soon. The corpse and gun are stashed under Charlie’s Pub, which Julian (William deVry) still plans to renovate.

Where is General Hospital going with all this? Could there be a surprising link between Margaux and that body? It’s possible that Sonny disposed of Margaux’s father or another beloved relative. That’d be a great twist for GH fans. Margaux may mistakenly believe Sonny was the actual killer or at least want him to go down for the cover-up.

Then again, there could be some other scenario where Margaux’s family was wronged. The body and incriminating weapon could be part of how she’ll ultimately get her revenge. Margaux may find out where everything’s hidden, which could mean disaster for Sonny.