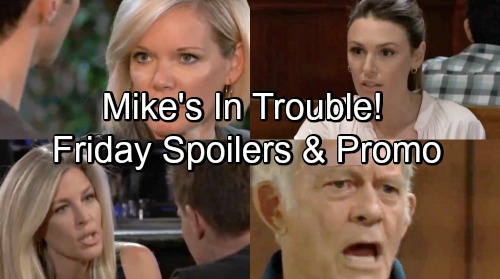 General Hospital (GH) spoilers for Friday, August 24, 2018 reveal PCPD joins forces with the WSB, Ultimatums are made while suspicions continue to grow. Does danger lie ahead for an ailing Mike? GH viewers will not want to miss out on all the excitement happening on Friday’s episode!

GH spoilers indicate Detective Harrison Chase (Josh Swickard) is now part of the investigation, involving his missing brother, Dr. Hamilton Finn (Michael Easton) and WSB Agent, Anna Devane (Finola Hughes); and Robert Scorpio (Tristan Rogers) is not pleased about it, at all! Spoilers show Chase telling Scorpio to let him help before it is too late. Will the stubborn spy allow the newbie officer help?

Meanwhile, Anna and Finn remain at the mercy of their captors. Finn has managed to wake Cassandra Pierce (Jessica Tuck) from her comatose state; but Anna isn’t playing her games. She demands that Cassandra either help her and Finn, or he will put her right back into “dreamland!”

General Hospital sources tease Ava Jerome (Maura West) is not finished with those who’ve betrayed her. She informs former flame, Dr. Griffin Munro (Matt Cohen) that after he had sex with her daughter, Kiki (Hayley Erin); they will hurt just as much as she has.

DA Margaux Dawson (Elizabeth Hendrickson) seems to be toying with Drew Cain (Billy Miller), insisting that she is simply interested in getting to know him. Carly Corinthos (Laura Wright), on the other hand, is desperate to protect Drew’s twin brother and her best friend, Jason Morgan (Steve Burton).

Carly worries that the b***h is looking for evidence against Jason. Could Carly be the person who finally unites the brothers in their common interest in destroying the new DA of Port Charles?

General Hospital spoilers reveal things are tense at the Corinthos’ home when Felix DuBois (Marc Samuel) tells a concerned Sonny Corinthos (Maurice Benard) that he will know what to do when the time is right for his father; Sonny certainly hopes he will be able to do it. Meanwhile, Mike Corbin (Max Gail) comes down the stairs into the living room and shouts out, asking if someone is there?

Be sure to tune into ABC’s General Hospital (GH) on Friday, August 24, 2018 to catch up on everything happening in Port Charles right now. Check CDL General Hospital spoilers often for updates, news, rumors, and spoilers!