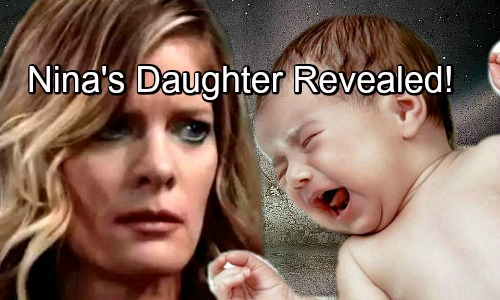 General Hospital spoilers remind GH fans that speculation has gone on for years about Nina’s (Michelle Stafford) baby. Long before General Hospital writers told us the child survived, we suspected she did. Now we know Nina has a daughter out there but who is she?

The only thing we know about General Hospital’s Nelle (Chloe Lanier) is that Frank is her father. But is Frank her biological father? Could Nelle have been adopted? Madeline (Donna Mills) says she let the lawyers take care of the adoption. Madeline supposedly never met the adoptive parents.

Could Madeline’s broker have placed the baby with an abusive father? Could Frank have used Nina’s daughter for money? We know Nina has had mental health issues, so has Nelle. Maybe the mental problems in their connection as parent and child. However, with Chloe leaving the show, Nelle doesn’t seem likely.

Could It Be Kiki?

Because of the animosity between Kiki (Hayley Erin) and Ava (Maura West), fans have wondered for years if she was Nina’s child. Ava has slept with Kiki’s boyfriend twice. Ava berates Kiki all the time. Kiki’s father has been proven to be Silas (Michael Easton).

Ava had an affair with Silas. Madeline hated Silas, she hated that baby. It’s not far-fetched to believe she would give Ava that child. However, Ava swore for years that her daughter belonged to Franco (Roger Howarth).

Why would Ava not exploit that child to control Silas? Why would Ava hide the child from Silas unless she wasn’t really pregnant? Silas was a successful doctor, Ava is devious. Under normal circumstances, Ava would have bled Silas dry. Ava doesn’t act like she loves Kiki at all. There could certainly be more to this story than meets the eye.

General Hospital fans have no idea who Francesca (Celeste DeAstis) is. We don’t know her parents. We don’t know where she is from. Fans have no background information at all on her. Could she be Nina’s daughter? Francesca is beautiful and smart. She’s in the medical field, like Silas.

Her family isn’t rich. Francesca has been intimidated by men like Bensch (James DePaiva). Francesca’s awkwardness with men makes us wonder about her male role models. Maybe Francesca was given to a single parent. Maybe Francesca’s adoptive parents divorced. With no ties to anyone in Port Charles, Francesca could easily be Nina’s child.

Then There Is Amy

General Hospital’s Amy (Risa Dorken) has no one but her brother who she adores. Chet (Chris Van Etten) seems to love Amy just as much. We don’t know anything about their family dynamics. Could Amy and Chet be so close because Amy is adopted?

Amy has bent over backward to help with Chet’s medical bills. Chet defends his sister through everything. Amy is a nurse, something that could have been gained from Silas. Amy was bullied as a child, something adoptees often suffer from. Amy could very easily be Nina’s child as well.

General Hospital spoilers state that Kiki is the only female that we have information on in this age bracket. Kiki is just as unlikely as she is likely to be Nina’s. Ava is greedy and keeping her a secret makes no sense. Francesca or Amy would be much more likely to have been adopted. Nelle would also be unlikely since she is gone for now. Come back to CDL for all your spoilers and news – where hopefully, we will have the answer soon.