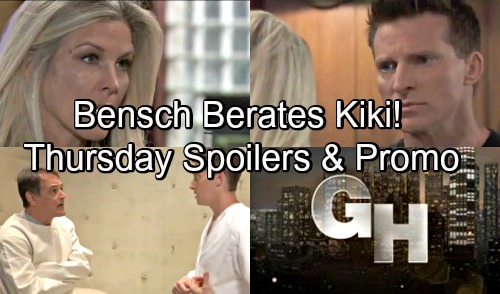 General Hospital spoilers for Thursday, August 23, tease that word will spread about Anna (Finola Hughes) and Finn’s (Michael Easton) abductions. Chase (Josh Swickard) will unhappily confer with Robert (Tristan Rogers) and Jordan (Vinessa Antoine) about the situation and lament that if Finn dies, he’ll never get a chance to know him.

Meanwhile, as they are held captive, Finn and Anna will finally get to lay eyes on Cassandra (Jessica Tuck), who is unconscious in a hospital bed. Finn apparently won’t like what he discovers about Cassandra’s condition, as he shouts at his captor that “now we’re all at risk.”

Could Cassandra have a dangerous, communicable disease? Or perhaps Finn is messing with his captors. GH spoilers say that Finn will think fast on his feet, so perhaps he will fib a bit about the seriousness of Cassandra’s condition in a ploy to get additional medical attention for Cassandra (and thus communicate with the outside world).

Next, on Thursday, August 23, it appears that Cameron (William Lipton) may be in more hot water, as Jake (Hudson West) chides him a bit about being in trouble. Perhaps Jake just found out about Cameron’s shoplifting incident and subsequent grounding and is rubbing it in.

Still reeling from his big loss in the sexual harassment case, Dr. Bensch (James DePaiva) makes an appearance on Thursday’s new GH episode, August 23, berating Kiki (Haley Erin) in front of other hospital staff. As Kiki stands by mortified, Bensch asks her forcefully, “What are you waiting for, Jerome?” It appears that Bensch is in retaliation mode and wants Kiki to pay for winning her case!

Finally, on Thursday, August 23, Jason (Steve Burton) and Carly (Laura Wright) discuss something important. Jason seems pretty concerned about Carly, and Carly states that “we know that a bad situation can only get worse.” Could they be talking about the body and gun that Mike (Max Gail) hid in the foundation at Charlie’s Pub? That certainly has had Carly worried lately. Or are they talking about something else?

It certainly sounds like Thursday’s an action-packed day in Port Charles! Be sure to keep up with the drama. Stay tuned to the ABC soap and don’t forget to check CDL often for the latest General Hospital spoilers, updates, and news.