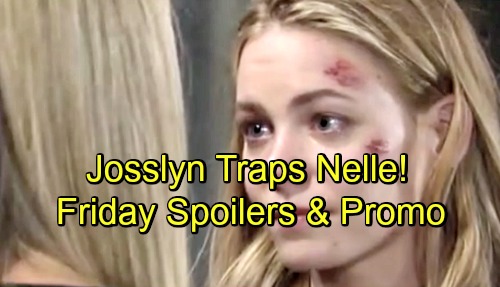 General Hospital (GH) spoilers for Friday, August 3, tease that Michael (Chad Duell) will speak with Chase (Josh Swickard) at the PCPD. Since Chase has been dealing with so much guilt, Michael may let him know that the baby’s death was ruled as unexplained. Kim (Tamara Braun) revealed that the crash didn’t cause the kid’s demise, so that should be a relief to Chase.

Michael and Chase will also talk about Nelle’s potential accomplice. Ava (Maura West) should make the most sense if they really think about it, but Brad (Parry Shen) could get grilled, too. He probably won’t be suspected of any involvement in Nelle’s scheme, but the cops could still have questions. Whatever the case, Jordan (Vinessa Antoine) will get on the phone and summon someone for a chat.

Chase will put an APB out on Nelle, but she’s already been spotted by Josslyn (Eden McCoy). As Nelle was trying to make a break for it, Josslyn stopped her enemy in her tracks. She’s livid over all the damage Nelle caused, so she’ll make her position clear. Joss will shout that Nelle messed with the wrong family. She’ll do whatever she can to make sure Nelle is taken back into police custody.

Other General Hospital spoilers say Stella (Vinessa Antoine) will have a chat with Curtis (Donnell Turner). It appears Stella’s friend, Chandra, reached out to him. Stella wanted to derail Curtis and Jordan’s engagement, but she changed her mind and told Chandra the truth. As a result, Chandra must’ve called Curtis to congratulate him.

Curtis won’t be happy that Stella was initially trying to pull something. However, Stella will just want to know if he thanked Chandra. She at least expects Curtis to be polite! Over with Maxie (Kirsten Storms), she’ll still feel like Nina’s (Michelle Stafford) keeping something from her. Perhaps Maxie hasn’t heard about Liesl’s (Kathleen Gati) escape yet. Nina could be the one to drop the bomb.

At GH, Lulu (Emme Rylan) will rip into Peter (Wes Ramsey) for deceiving her. She’ll be angry that she let herself play right into his hands. Peter will be sorry about Nathan (Ryan Paevey) and any other fallout that hurt Lulu. Of course, that won’t earn Lulu’s forgiveness. She’ll inevitably finish her lecture and storm out.

Finally, Robert (Tristan Rogers) will fill Finn (Michael Easton) in on the plan. He’ll insist that Finn’s going to lead him to Anna’s (Finola Hughes) captor. After that, Robert can bring down the hammer. He’ll want to handle the most dangerous part of this mission, but Finn certainly won’t be out of harm’s way. They’re both taking on a risky task for Anna’s sake, but it’ll be worth it in the end.