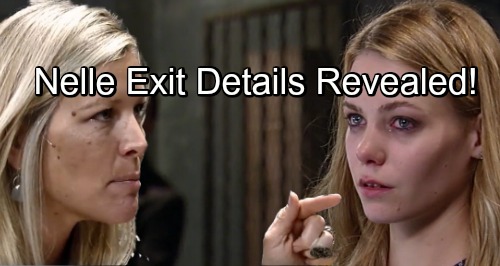 General Hospital (GH) spoilers tease that new details are emerging about Nelle’s (Chloe Lanier) exit. GH fans have known about Lanier’s departure for a while now, but everyone’s been wondering how her character would actually leave the canvas. There’s no shortage of possibilities when you’re dealing with someone as insane and vindictive as Nelle.

Since almost everyone in town hates Nelle’s guts, many viewers thought General Hospital might set up a murder mystery. That would’ve been a great story, but it also would’ve been a total waste. Nelle’s a drama goldmine and she’s leaving behind a child in Port Charles. It’d be a shame to shut the door on Nelle entirely.

That’s why GH is opting for something open-ended. General Hospital spoilers state that Nelle won’t be killed off, so it’s nice to settle that once and for all. According to a Soap Opera Digest interview, Nelle will survive her chaotic run and hopefully return for additional mayhem down the road.

Although Lanier chose to leave her contract role, the great news is that she’s open to a recurring part or a comeback stint in the future. General Hospital currently has no plans to recast Nelle, which makes sense. The character could use a rest and Lanier would be tough to top in this role anyway. If Nelle ever returns, there’s a good chance it’ll be because Lanier’s on board.

Since we know Nelle won’t die, that leaves two possibilities. Nelle can flee Port Charles or land behind bars. Which one will it be? General Hospital spoilers say Nelle will at least attempt an escape soon. She’ll manage to sneak away from the cops and head down to the pier.

Nelle will be desperate to keep her freedom and build a new life for herself elsewhere. Will she succeed or get caught trying to make her getaway? Time will tell, but we know who Lanier’s final scene partner will be. Nelle will have one last faceoff with her worst enemy – vengeful Carly (Laura Wright)!

Will the showdown happen before or after Nelle makes a break for it? Will Carly be cleared and catch up with her? Regardless, Carly will do everything she can to stop her tormentor. She won’t want Nelle to avoid justice.

However, it’d really be more fun to just have Nelle out there somewhere. That way the threat of her return could hang over Port Charles. Nelle could come back anytime and shake things up! Will you miss Nelle and all her dirty tricks? We’ll give you updates as other GH news comes in. Stay tuned to the ABC soap and don’t forget to check CDL often for the latest General Hospital spoilers, updates and news.