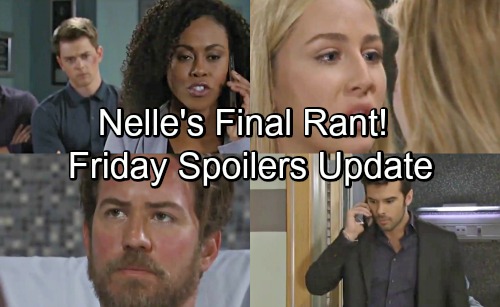 General Hospital (GH) spoilers for Friday, August 3, tease that Curtis (Donnell Turner) will confront Stella (Vernee Watson). After Chandra gets in touch with him, Curtis will realize Stella put her up to it. He’ll suspect that Stella was trying to rock the boat with Jordan (Vinessa Antoine), but he may be a bit confused.

It looks like Chandra will congratulate Curtis on his impending nuptials, so he might wonder what Stella’s game is. Stella was originally going to call Chandra in as an interloper, but she backed out at the last minute. She called Chandra again and revealed that Curtis was getting married, which means “Jurtis” is safe…for now.

However, Stella will hope Curtis used his manners and thanked Chandra for calling. She won’t want to burn any bridges just in case! Meanwhile, Finn (Michael Easton) will follow Robert’s (Tristan Rogers) instructions. He’ll intentionally walk into the trap of Anna’s (Finola Hughes) captor. Finn will do whatever he can to point Robert in the right direction and score Anna her freedom.

Elsewhere, Nina (Michelle Stafford) will seem a bit off. During a chat with Maxie (Kirsten Storms), Nina will get grilled about what she’s hiding. Maybe this involves the crash and Liesl’s (Kathleen Gati) getaway. Nina may have to fill Maxie in on all the drama that went down.

At GH, Peter (Wes Ramsey) will listen to Lulu’s (Emme Rylan) outburst. She’ll unload all her anger over Nathan’s (Ryan Paevey) death and Maxie’s suffering. Lulu will beat herself up over her decision to trust Peter and do all his dirty work. She’ll realize she played a big role in his devious agenda.

Other General Hospital spoilers say Chase (Josh Swickard) will have to act fast. He’ll put an APB out on Nelle (Chloe Lanier) and hope he can catch her before she flees Port Charles. Chase will also want to track down Nelle’s partner in crime. He intends to find out if Nelle was working with someone, so he’ll discuss the matter with Michael (Chad Duell).

Ava (Maura West) could find herself facing accusations soon enough. Between her track record and her connection to Nelle, Ava’s a natural suspect. Of course, Brad (Parry Shen) is also friends with Nelle. He also has a scheming side in his past, so that could stir up some suspicions.

Either way, Jordan will make an important phone call on Friday. She’ll call somebody down to the police station for a chat about Nelle’s actions. On the pier, Josslyn (Eden McCoy) will face off with Nelle. She just stopped Nelle from making a break for it and now the battle’s on! Josslyn’s anger will erupt as she recaps everything Carly (Laura Wright) and Michael (Chad Duell) have endured.

Nelle will spin the story as usual, but Joss won’t buy it for a second. She’ll probably keep ranting until the cops arrive, so this blowup could actually accomplish something. We’ll give you updates as other General Hospital news comes in. Stick with ABC’s GH and don’t forget to check CDL often for the latest General Hospital spoilers, updates and news.