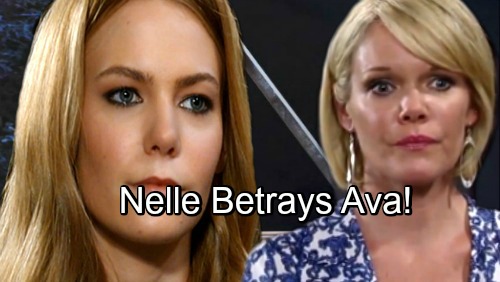 General Hospital (GH) spoilers tease that Nelle (Chloe Lanier) will go down fighting. The wheels are always turning in that manipulative head. Nelle even had the nerve to tell Michael (Chad Duell) they could “heal together.” This chick is truly crazy!

Nelle also tried to get Kim (Tamara Braun) to delay her release, but that plan didn’t work out. Since she’d exhausted all other options, an escape attempt was Nelle’s last resort. That brings us to Josslyn’s (Eden McCoy) meltdown. She’s certainly going to have a big one in Friday’s GH episode. Joss will suggest that nobody messes with her family and gets away with it.

Of course, Nelle will turn on the waterworks and claim she’s innocent. She’ll inevitably accuse Carly of poisoning Josslyn against her. However, Josslyn is officially done. She won’t believe another word out of Nelle’s mouth, so the battle will rage on.

Once Nelle gets agitated, she may admit that Joss is right. Nelle might confess that she really did gaslight Carly and plan Michael’s murder. She’s not sorry about what she did. Nelle’s only sorry that she got caught. This confrontation is the perfect slap opportunity, so Josslyn had better not let us down!

Now that Josslyn hates Nelle’s guts, there’s only one “friend” left to burn. Nelle promised she wouldn’t say anything about Ava (Maura West) and the baby blanket. Will she really keep her word? Nelle lies as easily as she breathes, so Ava should be afraid…VERY afraid. It’s tough to believe the truth will actually stay under wraps.

Nelle’s main motive for keeping quiet involves Carly. If she turned in Ava, she’d have to admit she lied about the staircase shove. That would clear Carly’s name, which is the last thing Nelle wants to do. Unfortunately, all bets could be off if Carly gets cleared anyway. Jason (Steve Burton) suggested that Margaux (Elizabeth Hendrickson) would want to distance herself from this disaster of a case.

Since Nelle’s credibility is completely shot, it’d be best to just drop this. What happens when Nelle no longer has a reason to stay tight-lipped? She just might blab about Ava being an accomplice. General Hospital spoilers say Nelle will do plenty of taunting on August 7. It sounds like she’ll be taken into custody again and later, try to get the last laugh.

Nelle might squeal on Ava and create one last round of drama on her way out. It’d be great for Griffin (Matt Cohen) to blow up at Ava while keeping his own secret. He’d look like a real hypocrite when the Kiki (Hayley Erin) hookup news inevitably explodes.