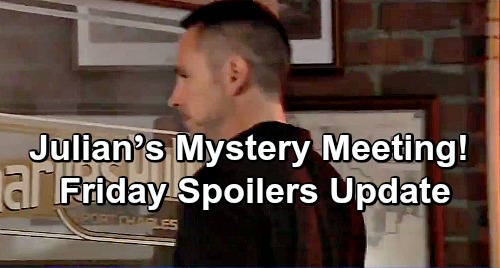 General Hospital (GH) spoilers update for Friday, December 21, tease Monica (Leslie Charleson) will get some unfortunate news. Bobbie (Jacklyn Zeman) will run up to her at GH and insist that they’ve got a real problem on their hands. It seems the person set to play Santa canceled, so they’ll need someone to fill in ASAP.

Oscar (Garren Stitt) will step up to tackle a crisis as well. He’ll be feeling a bit better as he takes a break from his treatment. Oscar will use this opportunity to brighten Christmas for the other sick kids. He’ll want to give back to the community and make a difference.

At Charlie’s Pub, Julian (William deVry) will greet a visitor. He’ll admit he wasn’t sure this mystery man or woman would show. Willow ran into Julian during her breakfast date with Chase (Josh Swickard), which led to some tense moments and nervous looks. Since Willow is Wiley’s birth mother, Julian may summon her for a chat. He may sense that she could be a problem if they don’t talk.

Willow will also get some encouragement from Michael (Chad Duell) on Friday. They’ll head off to do something together, so she should appreciate the company. Whether this involves another bereavement group meeting or just a cup of coffee, Willow probably won’t want to be alone. Michael’s presence should give her comfort as she copes with her complicated backstory.

Other General Hospital spoilers say Mike (Max Gail) will have another memory lapse. He won’t recall the chaos he caused by running off with Yvonne (Janet Hubert) to that jazz club. Mike won’t remember Yvonne’s marriage either, so he’ll think he’s waiting on her for another date. Sonny (Maurice Benard) will be dismayed by Mike’s rapid decline. He’s gotten a lot worse lately, so it’s been tough.

Stella (Vernee Watson) will hear about Mike and Yvonne’s risky outing on Friday. Jordan (Briana Nicole Henry) will deliver the shocker and leave Stella feeling for all parties involved. She’ll understand everyone’s perspective here, but she’ll still probably take Mike’s side. It’s clear that he never meant to cause any harm. It’s not Mike’s fault he wasn’t being monitored like he should’ve been.

General Hospital fans will also see Josslyn (Eden McCoy) blow her top. She’ll find out Jason (Steve Burton) kept Oscar’s cancer diagnosis a secret, so she’ll wonder how Jason could do this do her. Josslyn trusted Jason as a close friend of the family, but she’ll feel deeply betrayed by his decision.

At Anna’s (Finola Hughes) place, she’ll be thrilled when Peter (Wes Ramsey) comes over. Anna may not have expected Peter to accept her invitation, but she’ll be so glad he did. Finn (Michael Easton) will find a reason to step away for the evening, so that should give Peter and Anna time to hash things out. They can’t fix their problems in one night, but the fact that Peter’s trying will mean a lot.

Elsewhere, Aiden (Jason David) will deal with more drama. He’ll be bummed out over something just before Christmas, so the poor kid’s turmoil will continue. We’ll give you updates as other GH details emerge. Stay tuned the ABC soap and don’t forget to check CDL often for the latest General Hospital spoilers, updates and news.