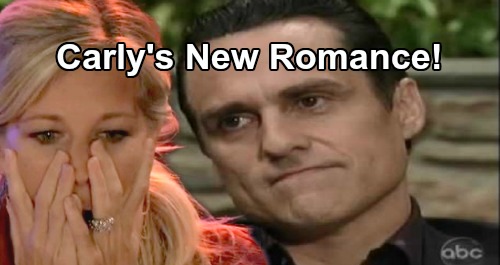 There was no real evidence to back up Nelle’s (Chloe Lanier) claims about Carly, but the DA was determined to take down a Corinthos. Margaux was the reason Carly landed at horrible Ferncliff instead of a cushy, private facility. She just had to make life difficult and Carly hasn’t forgotten that.

Of course, Margaux was also determined to take Sonny down for a while. She’s changed her tune now, but Carly doesn’t trust her and she’s not sure she trusts Sonny either. General Hospital spoilers say those trust issues will get worse and worse in the coming weeks. Sonny and Carly’s bickering will spiral out of control.

On Wednesday’s GH episode, December 19, Carly insists she won’t take Sonny back if he betrays her again. That’s especially true if it’s with her foe, Margaux. Is this a promise that Carly can keep? Few soap couples actually cut ties for good, but Carly certainly believes she can sever their connection. She’s not interested in signing up for more heartbreak.

There’s no guarantee Sonny will cross the line like Carly predicts, but he could with the way things are going. Sonny and Margaux will inevitably keep sharing warm moments. They’ll grow closer, which can only spell trouble for Carly and Sonny’s relationship.

Jason (Steve Burton) will see all the signs and try to stop it, but he may be powerless. A “MarSon” hookup could become a reality despite Jason’s efforts and Carly’s warnings. If so, Carly may stick to her vow. She might refuse to take Sonny back, which would open the door to a new pairing.

Many General Hospital fans think Sonny and Carly are a bit stale these days anyway. Perhaps it’s time for GH to shake it up a little. If Carly divorces Sonny, who could she be paired up with next? Laura Wright would undoubtedly like for General Hospital to give Carly and Peter (Wes Ramsey) a try. Ramsey is Wright’s real-life boyfriend, so it’s easy to imagine her pushing for that.

Maxie (Kirsten Storms) has other viable love interest options like Michael (Chad Duell) and Chase (Josh Swickard). There’s been a lot of buildup for Peter and Maxie, but that doesn’t mean it’d destined to work out. Maybe it’d be worth giving Carly and Peter a shot, but it’s tough to say without seeing their chemistry on screen. What works in real life doesn’t always work in reel life, so you never know!