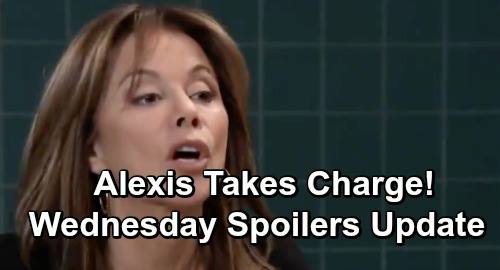 General Hospital (GH) spoilers update for Wednesday, December 19, tease that Margaux (Elizabeth Hendrickson) will set up some reunions. She just located Mike (Max Gail), so that’s great news for Sonny (Maurice Benard). Since Mike ran off with Yvonne (Janet Hubert), she’s hopefully still by his side and can be returned to Marcus (Nigel Gibbs). He’ll be relieved, but don’t expect his anger to disappear.

Marcus will still want Mike punished for abducting Yvonne, but that’s clearly not what happened. Both Yvonne and Mike have Alzheimer’s, so they didn’t know they were doing anything wrong. When Marcus refuses to grasp Mike’s issues, Margaux may intervene. She’s on Sonny’s side now, so she’ll help him work all this out and move on.

Sonny will feel like they can take precautions to make sure this doesn’t happen again. He won’t think Mike poses any kind of threat to Yvonne’s safety. While Sonny wraps up this crisis, Carly (Laura Wright) will unleash her wrath. She’ll do some venting and let Jason (Steve Burton) know she won’t stand for an affair. If Sonny’s headed down the road again, Carly won’t be taking him back.

Other General Hospital spoilers say Kristina (Lexi Ainsworth) will fret over crossed signals. She kissed Valerie (Brytni Sarpy) because it felt right at the time, but it sent Val into panic mode. Valerie couldn’t get out of there fast enough. Of course, that’s probably because it felt right to her as well. Valerie certainly wasn’t prepared for any of this, so she’ll continue to struggle with her feelings.

As for Kristina, she’ll explain at least part of the story to Sam and kick herself for blowing up a friendship. Kristina won’t be happy about coming home to her sister either. She might tell Sam she intends to move out and stop cramping her style. Kristina may decide to join the DOD community house, which could sink her deeper into cult trouble.

At the police station, Alexis (Nancy Lee Grahn) will try to keep Cameron (William Lipton) calm. He’ll be concerned about landing behind bars, but Alexis will just want him to listen. She’ll need Cam to do exactly what she tells him and hope the outcome isn’t too ugly. With Alexis as his lawyer, Cameron is in good hands.

GH fans will also see some tender moments between Valentin (James Patrick Stuart) and Nina (Michelle Stafford). She’ll question whether his invitation might be more of a demand, but he’ll assure Nina that she’s running the show. Valentin won’t want anything about this evening to feel harsh or forced. He’ll hope this invite can put him one step closer to new beginning – and it looks like it just might!