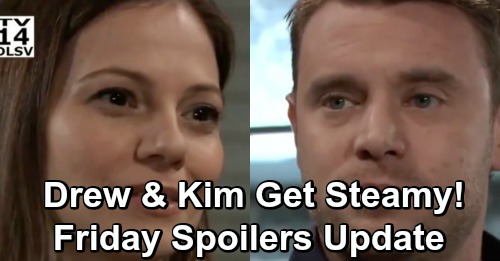 General Hospital (GH) spoilers for Friday, December 28, tease that Jordan Ashford (Briana Nicole Henry) will get some surprising news. She’ll find out Curtis Ashford (Donnell Turner) has a meeting planned for New Year’s Eve. Peyton Mills (John Patrick Jordan) wanted to speak with Curtis, but it’s odd to schedule it for the night of a major holiday.

Jordan may hope she can convince Curtis to wiggle out of it. She may suggest that this TV producer can wait until they don’t have a party to go to. Regardless, Peyton won’t be available after all.

His interview footage was met with disapproval from Ryan Chamberlain (Jon Lindstrom). Peyton even planned to raise the possibility that Ryan was still alive at the very end.

Ryan can’t take the chance that someone will believe Peyton and put it all together. He closed the door to offer “notes,” but we all know Peyton is a dead man. General Hospital spoilers say Ryan will finish his gruesome task and leave the screening room.

As Ryan exits, he’ll wonder who might come looking for Peyton. It appears Ryan will swipe Peyton’s phone or something else that reveals his schedule.

A quick text would get Curtis off the hook and give Ryan time to put the body somewhere. Since Ryan moved his previous corpses, there’s no reason to think he’ll leave Peyton where he kills him.

Ryan will likely dump dead Peyton in some corner to cause New Year’s Eve panic. There’ll be a party going on across town, so Ryan may love the idea of showing off his latest kill.

General Hospital spoilers say Olivia Quartermaine (Lisa LoCicero) will stumble across something alarming. It sounds like she’ll be the body discoverer, so she’s sure to be rattled. Before that, Ned Quartermaine (Wally Kurth) will try to lay down the law.

Of course, there’ll be no denying the serial killer connection once Peyton’s corpse is found. That’s just too many bodies popping up on holidays. Elsewhere, Laura Collins (Genie Francis) will stun Scott Baldwin (Kin Shriner) with info about Ava Jerome (Maura Jerome).

She’ll insist that Kevin Collins (Jon Lindstrom) and Ava are a thing now, so Scott will struggle to understand such a weird pairing.

Since Ryan is posing as his twin, people will continue to think Kevin is exhibiting strange behavior. Ryan is raising red flags, so he’d better be more careful if he wants to keep this up. Over with Jason Morgan (Steve Burton), he’ll bring Sam McCall (Kelly Monaco) up to speed on Hank.

That’s the guy who confused Jason for Drew Cain (Billy Miller) at The Floating Rib – at least he pretended to be confused!

In reality, Hank probably knows a lot more than he’s letting on. After Jason provides updates, he’ll head to the New Year’s Eve party with Sam. They’ll kiss after the midnight countdown, so “JaSam” fans will look forward to that.

Michael and Willow will have to explain their connection to Kristina Corinthos-Davis (Lexi Ainsworth), who’ll be inquisitive about her big brother’s new friend.

At GH, Kim Nero (Tamara Braun) will end the night on a hot note. Drew and Kim conceived Oscar Nero (Garren Stitt) on New Year’s Eve, so this is a special occasion. After sharing this memory, Kim will lock lips with Drew just as Julian Jerome (William deVry) walks up.

General Hospital viewers will want to check out all the drama. We’ll keep you posted as other GH details emerge. Stick with the ABC soap and don’t forget to check CDL often for the latest General Hospital spoilers, updates and news.