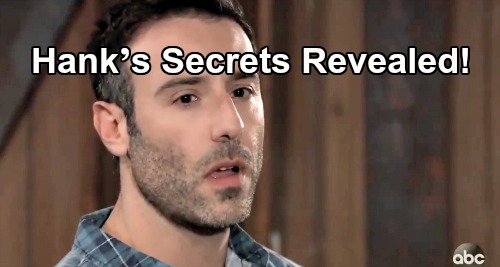 Of course, Hank remained cheerful as he tried to butter Jason up for information. He lost that game of pool and commented on how Drew was never that good. Once he was alone, Hank sank a great shot.

It’s clear that his pool skills aren’t the only thing he’s lying about. Like Jason said, Hank was just a little too eager to tell his story.

Between Hank’s grim expression later and the creepy music when Jason told Drew, it’s easy to assume something’s off with this guy. Drew’s got a lot on his plate right now, but curiosity may get the best of him. Even though Jason offered a warning, Drew may think he can learn something from Hank.

If Hank poses any kind of threat, Drew will want to know that, too. He has to watch out for the people he cares about. Drew needs to set this meeting up and see what Hank’s all about – if that’s even his real name.

Since Drew has no memory of his past, Hank could be making up his claims. There’s no guarantee Hank knew Drew at all.

What if Hank was fed info about Drew’s background and has been sent as part of a plot? Could he have old ties to Cesar Faison (Anders Hove) or another villain? That’s an option to mull over.

Then again, this could be about something a bit more personal. It’s worth mentioning that Kim Nero (Tamara Braun) left Drew’s side just as Jason arrived with the Hank news.

Why did GH not want Kim around to hear that? Perhaps it’s so they can have a big reveal later. Drew may mention Hank to Kim and wonder if he ever talked about his “buddy” from Afghanistan. Kim’s reaction could speak volumes. If she acts wary, it could mean she’s got a few secrets of her own.

It’s possible Kim and Hank were in on some scheme together. Another possibility is that General Hospital will do a paternity rewrite and make Hank Oscar Nero’s (Garren Stitt) father. That seems like a bad idea unless they plan to write Oscar and Kim out, but we have to consider all potential angles.

Even if Hank isn’t Oscar’s dad, he could still be a bitter and jealous ex of Kim’s. Maybe Kim cheated on Hank and chose to pine for Drew instead of getting back together with him.

If Hank’s some obsessed stalker, that’d give Drew a reason to protect Kim and pull her closer. It’d fuel the love story GH appears to be setting up.