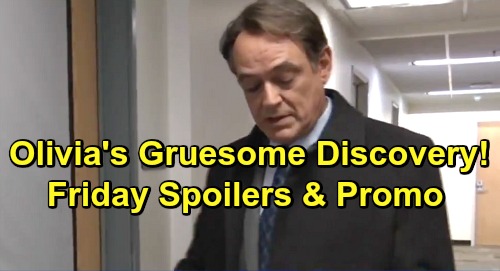 They’ll all be at a New Year’s Eve party, so Willow and Michael may not want to kill the vibe. Bringing up their bereavement group meetings would certainly do that. Whatever the case, they’ll tackle this mini drama and move on.

This isn’t the night to dwell on grief and what they’ve lost. It’s an opportunity to live it up and look forward to new beginnings.

Harrison Chase (Josh Swickard) will catch up with Willow at some point. She’ll be his date for the bash, so expect lots of flirting. General Hospital spoilers say they’ll share a kiss when the clock strikes midnight, but Michael may still be on Willow’s mind. Now that she knows he’s “Wiley’s” godfather, there’ll be even more of an incentive to keep Michael close.

Ned isn’t keen on panic spreading in Port Charles, but that’s bound to happen thanks to Ryan Chamberlain’s (Jon Lindstrom) new victim. He didn’t approve of that TV producer’s plans, so a tragic end awaits.

Peyton Mills (John Patrick Jordan) will become the third death of Ryan’s latest murder spree. As he’s leaving the producer’s screening room, he’ll check Peyton’s schedule to see if anyone will be looking for him. Ryan will spot a familiar name on the list, so he should come up with a strategy to handle it.

Curtis already found Kiki Jerome’s (Hayley Erin) body on Thanksgiving, so he probably won’t be the one who finds Peyton’s corpse. Ryan will likely stick to his usual pattern and move Peyton somewhere for the maximum effect.

Of course, a New Year’s Eve party seems like the perfect place to show off Ryan’s handiwork. Olivia Quartermaine (Lisa LoCicero) will make a shocking discovery before this episode’s over, so it sounds like she’ll stumble across Peyton – or what’s left of him! GH fans definitely won’t want to miss Olivia’s horrified reaction.

In the meantime, Laura Collins (Genie Francis) will fill Scott Baldwin (Kin Shriner) in on her problems. She’ll admit that Kevin Collins (Jon Lindstrom) is sleeping with Ava Jerome (Maura West), but she’s got one crucial fact wrong. It’s Ryan who’s wormed his way into Ava’s bed, not his brother.

Other General Hospital spoilers say Sam McCall (Kelly Monaco) will get updates on Jason Morgan’s (Steve Burton) recent encounter. He ran into an old buddy of Drew Cain’s (Billy Miller), but he’s not sure he buys this guy’s story.

Something feels off to Jason about this mysterious person from Drew’s past and it appears his hunch is correct. “Hank” looked awfully shady once Jason left him alone.

Finally, Kim Nero (Tamara Braun) will make an admission to Drew. She’ll confess that they conceived Oscar Nero (Garren Stitt) on New Year’s Eve, so these two will bond over Kim’s memory. General Hospital spoilers say they’ll cap the night off with a kiss and Julian Jerome (William deVry) will witness it.

It sounds like an action-packed episode’s on the way. We’ll keep you posted as other GH news comes in. Stay tuned to the ABC soap and don’t forget to check CDL often for the latest General Hospital spoilers, updates and news.