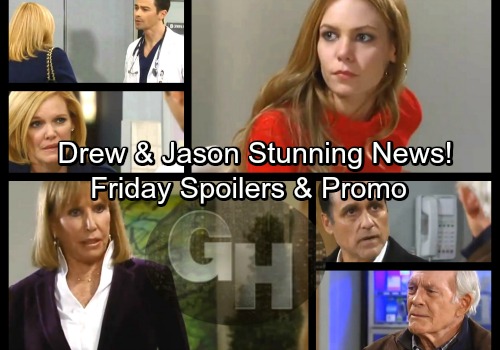 General Hospital (GH) spoilers for Friday, February 16, tease that Ava (Maura West) will try to push past her recent conflict with Griffin (Matt Cohen). They managed to patch things up a bit, but there’ll be some lingering tension. When Ava gives Griffin the cold shoulder, he’ll want to talk about what happened. Griffin will think there are some deeper issues to address.

Meanwhile, Kiki (Hayley Erin) will be feeling much better as she heads to work. She’ll probably have a mild hangover, but she’ll push through it and focus on her job. Once Kiki runs into Dr. Bensch (James DePaiva), she’ll note that he’s going to be seeing a lot more of her around GH. It sounds like Kiki plans to throw herself into her career instead of wallowing.

Nearby, Mike (Max Gail) will have to undergo some tests. He’ll be a little nervous, but Sonny (Maurice Benard) will offer comfort. Although Sonny believes something’s seriously wrong, he’ll downplay his concerns so Mike doesn’t get too anxious.

Griffin will try to get to the bottom of Mike’s problems, so expect a tough diagnosis eventually. There’s a good chance Mike has Alzheimer’s. Fortunately, knowing the truth might help Sonny and Carly (Laura Wright) get a grip on the situation.

Other General Hospital spoilers say Monica (Leslie Charleson) will catch Nelle (Chloe Lanier) off guard. Nelle may be busy working on her plan to take down Carly. She’ll be startled when Monica walks in the gallery, but she’ll quickly calm herself. Nelle has to play it cool if she wants to get away with her plot.

At the Corinthos home, Carly will attempt to get through to Jason (Steve Burton). Diane (Carolyn Hennesy) will let Jason (Steve Burton) know that an issue has come up. Faison (Anders Hove) has left something for Jason and Drew (Billy Miller) in his will. Jason won’t want anything more to do with Faison or whatever he bequeathed, but Carly will do her best to change his mind.

General Hospital spoilers say Carly will worry about the safety of Jason’s loved ones. She’ll contend that ignoring this won’t make it go away. Jason needs to figure out what’s up right along with Anna (Finola Hughes). She just learned she’s listed as a beneficiary, so she’s certainly puzzled as well.

Once Drew hears the news, he’ll also be perplexed and wary. It looks like Faison as a few more bombshells in store! We’ll give you updates as other GH details emerge. Stay tuned to the ABC soap and don’t forget to check CDL often for the latest General Hospital spoilers, updates and news.