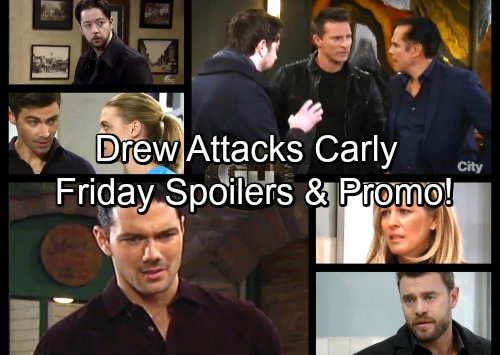 General Hospital (GH) spoilers for Friday, January 5, tease that Kiki (Haley Erin) and Griffin (Matt Cohen) will have a chat about the past. It looks like Griffin will fill Kiki in on Ava’s (Maura West) crazy suspicions and how they were resolved. He’ll let Kiki know that the cat’s out of the bag on his belated Christmas gift.

Kiki will note that Ava wanted Morgan (Bryan Craig) for herself at one point. She might think that’s why Ava jumped to the wrong conclusion. Ava assumes everyone sinks to the same lows, but that’s not always the case.

At least Ava’s showing some faith in Nelle (Chloe Lanier). She can tell that Nelle has some potential and she’s hoping they can help each other out. However, Nelle won’t be sure why Ava’s doing all of this. She’ll get a bit agitated in Friday’s GH episode.

Nelle will insist that she’s not even qualified to work at the gallery. She may push for more info on Ava’s ulterior motives. General Hospital spoilers say these two could have a scheme in motion soon, so we’ll see how that works out for them. This sounds like a recipe for disaster!

Across town, Dr. Obrecht (Kathleen Gati) will once again face questions. Maxie (Kirsten Storms) and Nathan (Ryan Paevey) will sit down for an intense conversation with the secretive doc. They’ll rev up the pressure and try to secure a confession. Dr. O will come clean about Nathan’s paternity soon, so he’ll have to deal with the fact that Faison (Anders Hove) is his father.

Meanwhile, Spinelli (Bradford Anderson) will continue his discussion with Sonny (Maurice Benard) and Jason (Steve Burton). They’ll decide Dr. Obrecht might be their best shot at getting additional clues. Sonny will contend that if Dr. O knows where to find Faison, she may know even more. They’ll suspect that Dr. Obrecht’s been keeping everyone in the dark on a few things.

Other General Hospital spoilers say Carly (Laura Wright) will cause another round of drama. She’ll confront Sam (Kelly Monaco) about shoving her feelings for Jason aside. Carly will feel like Sam’s just setting Drew (Billy Miller) up for more pain. She’ll think the whole love triangle’s going to suffer because Sam won’t admit what she wants.

As Carly offers a warning about hurting Drew, he’ll walk through the door. Naturally, Drew will ask what they’re talking about. Once Drew’s in the loop, he’ll urge Carly to butt out before turning his attention back to Sam. Her opinion is the only one that matters.

Unfortunately, Sam’s indeed facing confusion about her desires. She’ll try to ignore the chaos, but that’ll prove difficult in the weeks ahead. We’ll give you updates as other GH news comes in. Stick with the ABC soap and don’t forget to check CDL often for the latest General Hospital spoilers, updates and news.