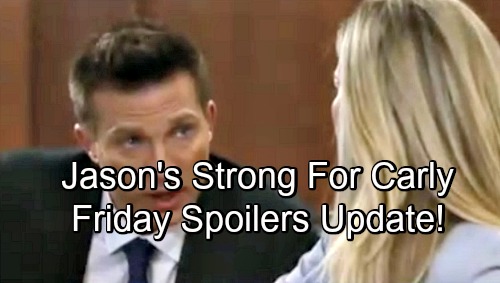 General Hospital (GH) spoilers for Friday, June 8, tease that Alexis (Nancy Lee Grahn) will have some big news to pass along. She’ll head to GH and pop in Monica’s (Patty McCormack) office for a chat. Alexis will mention that Kiki’s (Hayley Erin) taking her sexual harassment claims public. She’ll suggest that Monica should be prepared for the uproar that’s looming.

Across town, Curtis (Donnell Turner) will support Jordan (Vinessa Antoine) through a crisis. She’ll be upset about all the chaos surrounding Peter’s (Wes Ramsey) escape. Jordan’s job may be on the line, but she won’t let Peter derail her career. This police commissioner intends to fight for her position and keep her dreams intact.

Other General Hospital spoilers say Finn (Michael Easton) will console Anna (Finola Hughes). Robin (Kimberly McCullough) was understandably disturbed by Anna’s latest revelations. She’s still trying to absorb everything, so forgiveness just isn’t an option yet. Anna will fear that she’s broken their bond for good, but Finn will urge her to hang in there. He’ll be sure that Robin will come around in time.

Anna will appreciate having Finn in her corner right now. They’ll hit the sheets before long, so “Fanna” fans should enjoy that. Back in Port Charles, Michael (Chad Duell) will have Carly (Laura Wright) on his mind. Over the phone, he’ll rant about how hard Nelle (Chloe Lanier) came after his mom in court. 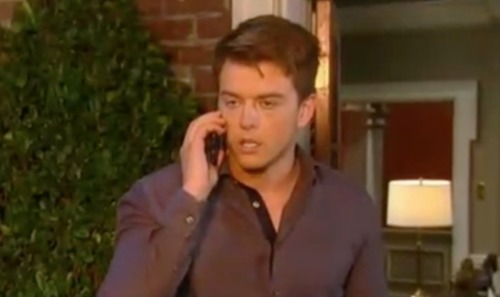 Suddenly, Nelle will reveal herself behind Michael. She’ll look wary as she asks what he’s doing. General Hospital spoilers say Michael will have to think fast. He’ll undoubtedly come up with a cover story and find a way to make Nelle believe it. Michael may even act like he’s ready to get back together. GH viewers can expect Nelle to be ecstatic on Friday, so a fake reunion is certainly a possibility.

In the courtroom, Diane (Carolyn Hennesy) will put Sonny (Maurice Benard) on the stand. She’ll pry the answers she needs out of him, so that should give her case a boost. Diane will get Sonny to open up about his concerns. He’ll talk about how afraid he’s been of Carly going off the deep end. Sonny will insist that his wife’s ill, not ruthless. He’ll hope that the judge will buy it and go easy on Carly.

Later, Jason (Steve Burton) will struggle to keep his promise. His testimony is crucial if Diane wants to sell Carly as insane. Jason’s the only one who witnessed most of Carly’s strange incidents. He never saw the scarf or any evidence of an explosion, so those are important points to convey.

However, Jason just doesn’t think this is the way to go. He’d rather see Carly stick to the truth, but she’ll turn down her last chance to do that. Carly will gently encourage Jason and let him corroborate the insanity defense. She’ll go against her instincts and trust Diane’s professional opinion.

Jason will stop short of calling Carly crazy, but he’ll do his best to back up his beloved pal. General Hospital spoilers say Margaux (Elizabeth Hendrickson) will try to trip Jason up, so don’t miss all the drama. We’ll give you updates as other GH details emerge. Stay tuned to the ABC soap and don’t forget to check CDL often for the latest General Hospital spoilers, updates and news.