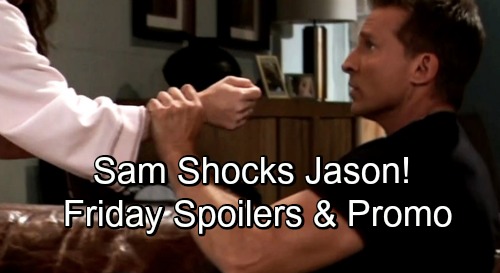 General Hospital (GH) spoilers for Friday, November 30, tease that Scott (Kin Shriner) will be the bearer of bad news. After he gets updates on Kiki’s (Hayley Erin) demise, Scott will have to tell Franco (Roger Howarth) and Liz (Rebecca Herbst). He’ll show up at their house and try to find the words to explain this nightmare.

Scott will finally drop the death bomb and leave Franco reeling. General Hospital spoilers say Franco will face plenty of pain and anger thanks to this revelation. Liz will also be disturbed by the horrific end to Kiki’s life. She’ll get another shock when she learns who’s been arrested for the crime.

Griffin (Matt Cohen) is in hot water over the bloody knife that was planted in his closet. He’ll maintain that he’s innocent and Anna (Finola Hughes) will believe him. During their next conversation, Anna will ponder who might’ve set Griffin up. She’ll feel certain that this wasn’t a random act of violence. Anna will assume Kiki was targeted and now Griffin’s being targeted, too.

At Ava’s (Maura West) penthouse, her emotions will pour out all over again. Maura West delivered a heartbreaking performance as Ava saw her daughter’s body on Thursday’s GH episode, November 29. Ava’s grief will get even worse in Friday’s new GH episode, November 30. She’ll mourn the loss of Kiki and battle regrets over how much animosity was between them.

Ava will be grateful to have “Kevin” (Jon Lindstrom) there for support, but she’ll actually be leaning on the killer himself. Ryan will put on quite a show as he keeps his dark secret. Meanwhile, other Port Charles residents will hear about Kiki’s death and Griffin’s arrest. Valentin (James Patrick Stuart), Nina (Michelle Stafford) and Sasha (Sofia Mattsson) will all be brought in the loop.

After Curtis feels the three of them in, they’ll all be stunned. None of them will think this makes any sense whatsoever. Griffin’s one of the gentlest souls in PC, so why would he murder the woman he loves? General Hospital viewers know he didn’t, so let’s hope Griffin gets cleared soon enough.

At GH, Terry (Cassandra James) will meet with Oscar (Garren Stitt), Kim (Tamara Braun) and Drew (Billy Miller). Oscar has agreed to start the clinical trial and there’s no time to waste. If he wants a shot at prolonging his life, they have to get the ball rolling.

Other General Hospital spoilers say Jason (Steve Burton) will wake up startled. Sam (Kelly Monaco) will reach down to stir Jason, but he’ll sense her presence and grab the arm above him. When Jason opens his eyes, he’ll see Sam (Kelly Monaco) staring back.

Jason will undoubtedly apologize for jolting up in attack mode. They should share some close moments as Sam expresses her gratitude. Jason was there for Sam when she was sick, so she’ll really appreciate it.

“JaSam” fans won’t want to miss the sweet scenes ahead. We’ll keep you posted as other GH details comes in. Stay tuned to the ABC soap and don’t forget to check CDL often for the latest General Hospital spoilers, update and news.