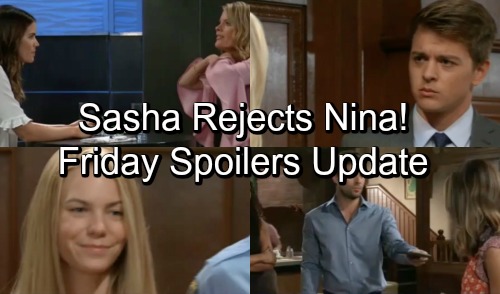 General Hospital (GH) spoilers update for Friday, October 12, tease that Nina (Michelle Stafford) will get a little too excited. She’ll decide to show Sasha (Sofia Mattsson) the heart pendant necklace and ask if she’s got the other half somewhere. Sasha will end up getting uncomfortable over all the fuss. It looks like the whole situation will become too much for her, so she’ll ultimately shut down this bonding idea.

While Nina faces a brutal rejection, Valentin (James Patrick Stuart) will have high hopes. He won’t know that things are going downhill fast across town. Curtis (Donnell Turner) will fill Valentin in on Nina and Sasha’s first meeting. He caught the beginning of it and saw the potential for a solid connection. Curtis will just hope that Sasha’s willing to meet Nina halfway, but she obviously won’t be for now.

Elsewhere, Liz (Rebecca Herbst) will find out what’s been bothering Aiden (Jason David). He’s been trying to avoid school and battling an upset stomach from the anxiety. After Aiden confesses why, Liz will be confused. She won’t get why Aiden would keep her out of the loop, but he might admit that he was scared or embarrassed. If bullies are involved, it’s easy to see why Aiden would hesitate.

Other General Hospital spoilers say Nelle (Chloe Lanier) will make her GH comeback. She won’t be around long, but she’ll still have time to make some waves. It seems Nelle’s court date will put her in Michael (Chad Duell) and Carly’s (Laura Wright) path. Carly will suggest that they’re going to be rid of Nelle for good, but maybe she shouldn’t be so sure. Nelle undoubtedly has a few tricks up her sleeve.

Michael will have a tense chat with his former flame on Friday. General Hospital spoilers say he’ll comment on her handcuffs and orange jumpsuit. Michael will think Nelle looks appropriate considering the crimes she carried out. He’ll be glad she’s getting what’s going to her, but Nelle made him suffer, too. We can’t forget that Brad (Parry Shen) and Lucas (Ryan Carnes) are raising Jonah as their son.

Will Nelle offer a hint about that baby swap? She may let something slip that’ll raise red flags for Michael down the road. Meanwhile, Kristina (Lexi Ainsworth) will force a subject change. She’ll feel suffocated when Alexis (Nancy Lee Grahn) and Sam (Kelly Monaco) start asking too many personal questions. Kristina will urge Sam to spill what’s up in her Jason (Steve Burton) romance instead.